79 Volumes of the Davis Enterprise Free to Caring Recipient (278)

Viewed as a single object -- a collection -- it is some 20 inches tall, consumes more than 20 feet of shelf space and weighs upwards of a thousand pounds. Stacked on their sides in piles, the volumes are several feet tall and fill the bed of a small pickup truck.
A sense of the collection’s scale and heft can be inferred from the accompanying three snapshots.
For many years, the collection has been installed on shelves in a storage building at my home and it was an invaluable resource in my Davis history research. But, time has passed and I no longer use it or have any plans to do so.
Davis Enterprise editor Debbie Davis gave me the collection and I am now offering it gratis to someone willing to receive and to care for it.
If you are interested, email me at jlofland@dcn.org.

Thursday, January 25th, a City of Davis Public Works crew installed the “new style” Old North Davis street signs. I happened to notice the crew working at the corner of 6th and E streets and made the snapshots that follow. 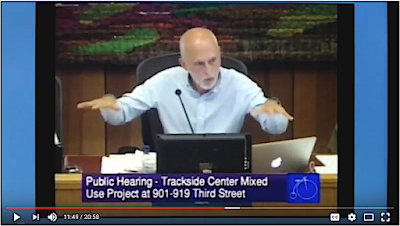 Only in Larger College Towns With Rich Social Media Networks: The Amazing Episode of Translating a Greek Passage in an Obscure 1736 French Opera (275)

Recently, Davis resident and musicologist Beverly Wilcox was writing an article on an 18th-century French opera that contained a passage, seemingly in Greek, that she wanted translated (images 1 and 2).

In the “old,” pre-digital world she would likely address her query to the UCD Classics department or such. But, we are now in the new digital age and “social media.” So, she took the more direct route of posting the problem on Davis Nextdoor! (Actually, it is on the even more specialized Old North Davis Nextdoor, although also sent to 30 neighborhoods.)

What is amazing to me, at least, is the outpouring of good help she got, as chronicled in images 1 through 5, which are extracts of what ensued. (The URL is https://nextdoor.com/news_feed/?post=70941071
Read more »
Posted by John Lofland at 8:36 AM 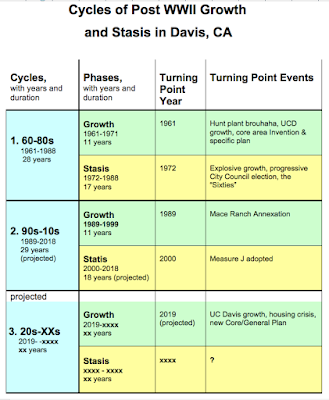 I was looking over a summary of growth, growth control, and development events in the last some 70 years in Davis and the idea came to mind that the series of them formed two long-term, two-stage cycles.

Twice since WWII and today, a phase of “growth” as a dominant mindset and policy was followed by a phase of “stasis.” Eerily, the first or growth phase of each cycle is about 11 years long and the second or stasis phase is (or might be) just less than 30 years long.

This to suggest that Davis’ history of growth and development and reactions to it might not be merely “one damn thing after another.” Rather, it might exhibit systematic and repetitive patterns that deserve (or require?) characterization as a cycle, defined in one dictionary as “a round of years . . . in which certain events or phenomenon repeat themselves in the same order and at the same intervals.”

A key feature of this cycle conception is that Davis might now be nearing the end of the second one. If It has the same “shape” in years as the first cycle, we should expect a third “great turning” in matters of growth and stasis within the next two years or so.

All of this is shown in overview in the accompanying chart titled “Cycles of Post WWII Growth and Stasis in Davis, CA.” Let me elaborate on what is shown there.
Read more »
Posted by John Lofland at 2:00 PM

As reported in the previous DHT post -- number 272 -- Arnold Rosenwald made 12 photos of  Davis campus events in 1932, nine featuring Picnic Day and three of Labor Day.

The meanings of the name, and observances of, “Labor Day” differ greatly between the U. S. and the UC campus at Davis. In the larger U.S., Labor Day is, quoting Wikipedia, “a public holiday [that] honors the American labor movement and the contributions workers have made to the strength, prosperity, laws and well-being of the country.” Unions began to promote such a day in the late 19th century and, in 1887, Oregon was the first state to make it an official holiday. “By the time it became an official federal holiday in 1894, thirty U.S. states officially celebrated Labor Day.”


A curious and interesting aspect is that, starting in 1897, the same name was used at the University of California (then meaning Berkeley) to label a campus-wide day of voluntary labor devoted to campus improvement projects (Ann Scheuring, Abundant Harvest, p. 35).

Given what we know about the intensity of public sentiments for and against labor unions, it is not a stretch to guess that Berkeley’s Labor Day was a sideways negative comment on the larger and “real” Labor Day.
Read more »
Posted by John Lofland at 5:43 PM


In post 266 on this blog, I reported on Dr. Arnold Rosenwald’s amazing home movies of ‘60s UCD Picnic Day parades and related public events. That report is at the URL immediately below and the movies themselves are at the URL below it.

Dr. Rosenwald was a poultry disease researcher and extension practitioner at UCD for some seven decades, dying at age 98 in 2008. He was also an undergraduate at the “Branch College,” graduating in 1930 (and subsequently earned a DVM degree, an MA in bacteriology, and a PhD in veterinary science).

Apparently also a “shutter bug,” the materials I acquired from his estate sale included not only the movies mentioned, but also an envelope containing 12 snapshots stamped on the back as developed in May of 1932. He had completed a BA at Davis in 1930, and was apparently visiting the campus and made nine photos of Picnic Day and three of Labor Day. (I report on them in the next DHT post, #273.)

The envelope also had negatives of 11 of the 12 snapshots and I have used them to make fresh images for this and the following post.
Read more »
Posted by John Lofland at 5:21 PM