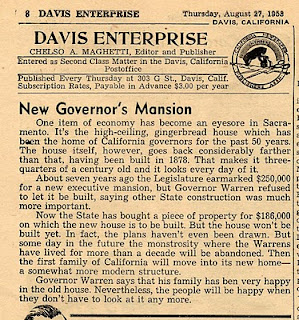 Browsing at an estate sale recently, I happened onto an original copy of the August 27, 1953 issue of the Davis Enterprise.  I bought it for 25 cents.
I like to waste my time reading this sort of thing and in doing so I encountered an editorial by Chelso Maghetti, the fellow who bought the Enterprise from William Henry Scott and appears also to have purchased Scott’s outlook.
As you can read in the graphic, Maghetti thinks the historic California governor’s mansion--which is now a state park-- is a “gingerbread high-ceiling” “monstrosity” and “eyesore.”

The sooner we “don’t have to look at it,” the better. It was built in 1878 and in 1953 “looks everyday of it.”
Instead, we need something “more modern.”
Given that we commonly think of the 1950s as a decade of conservative reaction following WWII and the era of “the man in the grey flannel suit,” it is easy to forget that in some respects American beliefs and actions in that period were really quite radical.
Specifically, there was a broad rejection of pre-WWII conceptions of how towns and cities should be organized and homes should be built and appear. In many places, this meant massive demolition of the existing stock of buildings.
During the 1950s and subsequent decades, Davis got rid of 43% of all the buildings that were in the entire town at the end of WWII.
This zeal was even stronger in what we now call the Downtown, where 63% of the buildings were demolished, moved out of the area, or reconstructed into “more modern” form.*
This is especially humorous and ironic when viewed in current Davis policy perspectives that stress the importance of  Davis “historical” and merely “old” buildings as elements of a program to attract people to come to Davis for its charming character.
Too bad these policy advocates were not around to express such sentiments to Chelso Meghetti.
___________
* See: John Lofland, Davis Heritage Buildings. Woodland, CA. Yolo County Historical Society Booklet 7, 2000, page 7, table 1.


This publication is available online at:
http://www.davishistoricalsociety.org/4-davis-historic-preservation-resources/davis-heritage-buildings-how-many-to-begain-with-how-many-left/
Posted by John Lofland at 8:59 AM