The Big Bike at Russell & Anderson: Once Proud But Now Virtually Invisible Icon (17) 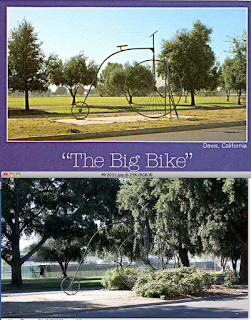 In 1976, a metal shop class at Davis High built a some 12-foot tall metal sculpture of a high wheeler (“penny-farthing”) bicycle that was installed in the median of Russell Boulevard just west of Anderson Road.*
The landscape there was open at that time and the sculpture was therefore a quite dramatic object. So dramatic, in fact, that a post card company made a card of it titled “The Big Bike,” as shown here.

Ordinary people posed by it, as seen in the second image, a photo dated December 1976. (I acquired this snapshot from the Miriam Hummel estate courtesy of Elisabeth Sherwin.) 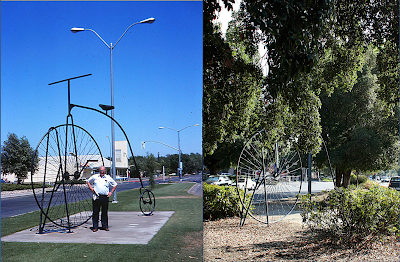 Despite the fact that Davis has become ever-more focused on the bike as a cultural, ecological and whatnot icon, the powers-that-be and were have allowed the Big Bike virtually to disappear into the landscaping.
As a matter of curiosity, I went out and photographed this forlorn sculpture from the angles of each of the two photos taken in 1976.
___________________
* These are the plaques at the base of the sculpture: 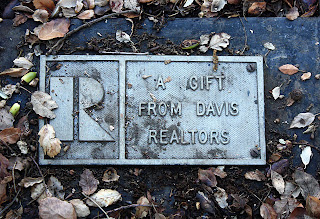 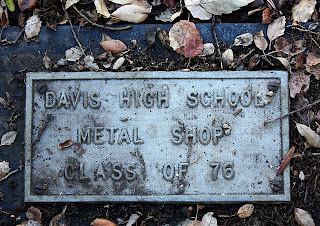