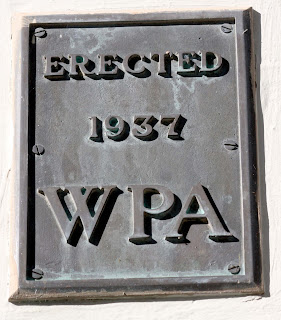 October 20, 2011
TO:  Parks and Recreation Commission (please distribute to commissioners).
FR:  Dennis Dingemans, Assistant Director of Hattie Weber Museum of Davis; Mary Lee Thomson, Projects Director of Hattie Weber Museum of Davis
RE: October Agenda Item – Retain WPA Restroom Building Including Additions
Why are we writing this memo?  We are the two HWMD board members most involved in creating exhibits and managing the material artifacts of the Museum.
Both are out of town for the week and can’t attend the P&R meeting at which you are discussing the retention of the WPA building (where non-destruction would be a change in the current plan).  We both spoke twice at the City Council Meetings (November of 2010 and then Summer of 2011) at which the Council Member majority seemed sympathetic to our request; this P&R agenda item is a direct result of council direction to staff to explore further our HWMD proposal to retain the WPA building as a object of veneration (a historical resource) and to utilize the WPA building as storage and display space for HWMD artifacts and for exhibits created by HWMD staff for viewing by the public (exhibits to be in back-loaded display cases occupying many of the buildings current 4 windows and 4 doorways). Of particular interest to the City Council members seemed to be whether, in the P & R commissioners’ minds, retaining the historic WPA building would constitute an unacceptable level of clutter in Central Park.

What do we propose?  We ask P & R to find that retaining the old WPA building (formerly built and used as restrooms and as space to support park maintenance) and its two sympathetic additions (built to store and stage the equipment for park staff activities).  In the interim (5 years?) we propose NO MAJOR CHANGES and no major expenditures.  We suggest that the modifications be proposed only after seeing how the current crude interior space serves our needs (for storage and staging space).  We would also be designing for further review the adaption of some of the four doorways and four windows to serve as backside-serviced display areas (for security purposes, we believe the rear access is best).  Our concept is that we would spend the next five years fund-raising to implement a couple of display spaces (windows first) as demonstration spaces.  Further, the need for conditioned space and/or built-in storage shelves would be evaluated.  We will learn whether odors and leaks need to be abated in order to drop below the nuisance level.  We are encouraged to see that the couch and other human comfort features used in the building indicate that the parks staff found the building’s interior to be appropriate for happy human use.  Like the parks’ staff, we would expect to observe the pattern of minor roof drip areas and respond appropriately to protect what we store there.  Summary:  no immediate changes or expenses would be requested.
Why the building is not an eyesore and its retention is not crowding.  No one we know thinks the building and its appended sun shade/trellis is ugly.  It was a low cost structure but it is decorated honestly and sturdily.  Its exterior appearance is as neither a shack nor a shed. The foot-thick walls were of concrete block walls covered with quality workmanship in the application of textured heavy stucco layers, in the coving of many corners and door/window surrounds, in the application of decorative roof vents, and in the thick shingling. Under our plan the object of disapproval (the interior of the two restrooms that constitute less than half of the current building’s space) would not be seen because the tacky men’s room would be closed to the public.  It is important to remember that a third or more of the building has been storage space for over fifty years and storage space was a 10% part of the original reason for building the structure in 1937.  The Hattie Weber Museum operates with a very disadvantageous shortage of secure storage space – in large part because we are not allowed to lock the storage area in the back 40% of the museum where our public restrooms inside the rear of the building must be left available at all times. Adding storage space to the existing building – whether with city funds or funds raised by the HWMD management team – would result in a much, much more expensive project and much more disruption than would our proposal to simple retain the attractive WPA building and its appendages (two small wings and the shade trellis). We ask you to consider favorably our logic:  save the WPA building and the city will not be having to come later to ask for an expanded Museum building that takes up new space in your park. From the point of view of human perception, retaining an old cottage-scale structure appears to be less of a cluttering of the park than does the construction of a new storage building or new addition to the museum building itself.
The park plan under consideration currently proposes that a new utilities service structure/tower be built, yet the location and the design is nowhere identified in your documents.  Retention of the WPA building would allow the efficient non-replacement of the current gas, electricity, and water service infrastructure that is within the storage parts of the building and is visible along the southern part of the north and east walls.  In evaluating whether the retention of the WPA building constitutes clutter and “too much crowding” you need to consider that if you tear it down then a new structure must be built for the utilities!  In our concept, our proposal includes sharing storage space with other park users who already (or newly) find the structure useful.  YOU CAN NEVER HAVE TOO MANY CLOSETS.
The building has an ecologically beautiful relationship with several of the large redwood trees planted nearby.  The roots and branches embrace the foundations and the sides and parts of the roof of the building.  The structure has a low profile visibly because of its proximity to the trees.  Removing the structure and particularly removing the foundation where it is entwined with major redwood tree roots might be disruptive to the trees.  Old North Davis Neighborhood Organization has a board member who is a certified arborist and he joined the unanimous ONDNA Board in endorsing the Museum’s proposal – both because they belief the building is a historic artifact worth preserving and because the health of the redwood trees is likely best protected by NOT DISRUPTIVELY REMOVING their close neighbor (the WPA building). 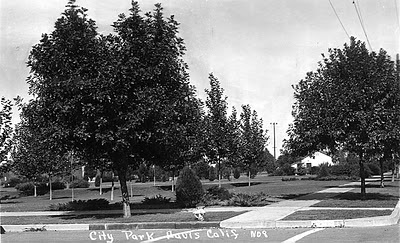 The HWMD team takes pride in that our building is the real thing, an historic artifact dating to the 1920s when the most important additions and changes were made to the old library building that later, successfully adapted its functions to become a museum.  We fear that the new “history plaza” will, if it displaces momentum for preserving the WPA building, do damage to a potential success story for preservation on a scale just a bit smaller than the success story that is our museum building’s history. No absurd synthetic place such as the public will recognize the history plaza to be can substitute for the satisfaction from encounters with the real thing  -- a preserved an adaptively re-used building that communicates our town’s understanding of how we came to be what we are.
Why are we so late in this proposed preservation and utilization of the existing bulding?  The HWMD staff was late in having the brainstorm that is our current proposal.  Simply, no one had believed that it was possible for city staff to be proposing the tearing down of such an obvious historical resource.  When we learned that the staff and the consultant had persisted in their proposal to remove the entirety of the WPA building and its additions, we were motivated to think hard about how our well-recognized storage needs might be met within a feel-good historic preservation project.  The HWMD team of docents and officers has only been assembled within the last three years and we were inexperienced when we collectively and individually failed to attend the park design workshops. BUT GOOD IDEAS SHOULDN’T BE REJECTED JUST BECAUSE THEY COME INCONVENIENTLY LATE.  Like most museums staffed with volunteers, we are mostly a senior citizen crowd.  We sometimes don’t act as quickly as we should.  But we think we have it right, now.  And, it might be mentioned, as senior citizens we docents and officers of the museum have mobility impairments that make the close proximity of our new storage to be a plus (the staff has suggested we need only 10 square feet – much to small for manipulation and storage of our collection – and that we could get this minimal storage space in a locker located a mile away).  How much more efficient it would be for our storage and staging (and display) spaces to be just 15 feet away and not 1500 yard away.
Thank you for responding to the City Council’s insistence that historic preservation values be given a full and unbiased hearing.  As we understand the venue and scope of your interests, we hope you articulate a reasonable metric by which to judge the degree of overcrowding represented by our proposal to prevent further construction by using an existing (historic and even mildly attractive) building to serve needs that otherwise in the near future will require, justly, new construction.  This is an aesthetics proposal as well as a green proposal:  the building adds antique texture to the park and embodies the historical evolution of the park while deflecting future pressures for additional construction.
PS:  the dimensions of this modest building are such that any effort to remove the 70 year old and 60-year old additions would be taking away valuable storage space as well as being disruptive of the trees and the human desire for finding comfort in continuity.  The original 1930s structure was 20 feet n/s and 20 feet e/w [400 square feet]; the 1940s addition was 8 feet by 12 feet (adding 100 square feet to the north side) and the 1950s addition was 18 feet by 8 feet (adding 140 square feet to the west side).  Since the 1950s, storage space was 240 square feet (all of the additions space) and 10% (40 square feet) of the original building’s footprint.   For 60 years now the building has contained 640 square feet of space – 360 square feet of restrooms and 280 square feet of storage.
Posted by John Lofland at 8:30 AM