In thinking about the odd “history plaza” being proposed for installation next to the Hattie Weber in Central Park, I began to wonder about the manner in which it proceeded through the City process of review and evaluation.

To help figure this out, I formulated some questions about that process and sent them to Anne Brunette, one of the lead city staff in the overall Central Park project.
Very promptly, she sent me an account of the process.
Because of the bearing these questions and answers have on the status of the “history plaza,” I publish both of them here.
Read more »
Posted by John Lofland at 10:48 AM

The Vanished World Along the Tracks North of the Depot (25)

None--I mean none--of the structures originally next to the Davis railroad tracks north of the train depot are there today. Everything in that area was demolished and replaced by the early 1970s.

This makes it hard for me--and I assume other people--to make sense of photographs taken of that area prior to, broadly, World War II. With no current points of reference visible in old photographs, we have no anchors, so to speak. Instead, we are peering into a virtually foreign country.


For this reason, I have been especially interested in the three photos of the Thorne army of the unemployed taken on March 18, 1914. They give us a rare “ground level” perspective on what was along at least some of the track north of the depot. Correlated with other images and maps, we can begin to form a firmer sense of the early world along the tracks.

I published two of those March, 1914 images in post # 21, November 13th. Recently, David Herbst graciously sent me a scan of a third photo taken that same day in that area.

Now, all three can be looked at in geographical sequence. Numbered 1, 2, and 3, they move northward up the track from north of Second Street toward Fourth Street.

Image 1 is taken just south of Third Street. We are looking west at the backs of buildings fronting G Street in the 300 block. The building that looms large on the left in Image 2 is just glimpsed to the right in Image 1. In Image 2, the train is turning at Third Street. In Image 3, we are fully into the 300 block. Fourth Street is in the distant right of the image.

For further orientation, look now at image 5. This is a 1910 Shinkle postcard looking north up the tracks. Third Street crosses the tracks in the middle-distance. The main buildings in the first four images are seen lined up on the left along the tracks.

Yet a different view is provided by Image 6, which is an excerpt from a 1909 map drawn by the Southern Pacific Railroad. Third Street is at the bottom, Fourth Street is at the top. The buildings to the left of the track between Third and Fourth streets are those glimpsed or seen in the previous five images.


This is the second of a two-part post. The first part (#22, Nov. 19, this blog) focused on design aspects of adaptively reusing the historic WPA building as a signal feature of an authentic History Plaza. This post focuses on design of the area more generally.
I think there are at last three design objectives of an authentic History Plaza and at least seven actions that can be taken to achieve them.
Read more »
Posted by John Lofland at 7:53 AM

Earliest Images of the WPA Building In Central Park (23)

One of the meanings of Davis being a tiny, rather no-place, town before World War II is that visual records of what it “was like” are available but not abundant. Some few things were rather lushly documented, certainly, in particular, the train depot, which was (and is) something of a photographer’s obsession (this blog’s post # 8, September 4, 2011).
But, many other places and buildings that have been of interest in recent years are difficult visually to document.
Read more »
Posted by John Lofland at 8:03 AM

Toward an Authentic History Plaza in Central Park: Part 1, The WPA Building (22)

This is the first of a two-part post proposing an authentic, not hypocritical, history plaza north of the HW Museum in Central Park. The plaza would feature adaptive reuse of the WPA building there now. This post focuses on the building. Part II will focus on the plaza.
The other day I went over to Central Park and walked around the WPA building (aka restrooms) with the “problem” of that structure in mind.
Read more »
Posted by John Lofland at 9:10 AM 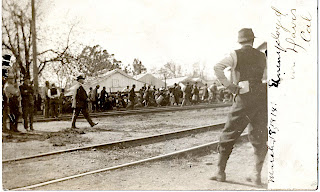 I post here a second passage written for but not included in the book, Davis. The account uses Davis Enterprise editor William Henry Scott’s report to provide a summary of dramatic events in Davis on March 18 & 19, 1914.
As chance would have it, a couple of years ago I happened onto two “real photo” postcards made at the events on March 18 and that someone named Alex acquired and sent to a Mildred Moore in San Francisco.  (Making and selling such picture postcards at events was apparently not unusual at that time, although few such cards have, seemingly, survived.) They are reproduced with this post.
Read more »
Posted by John Lofland at 7:37 AM 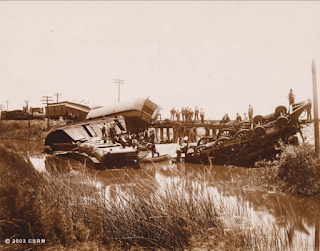 I am a member of a listserv focused on the life and works of Jack London. Recent events in Oakland have inspired London fans on that list to recall that 800 participants in Kelly’s Army (a western wing of Coxey’s Army) occupied an Oakland plaza in April, 1894.
Making Oakland’s current mayor look meek, the 1894 Oakland mayor called out the militia, deputized 1,200 new police deputies, and deployed a Gatling gun. The 800 protesters were rousted onto boxcars heading east.
Read more »
Posted by John Lofland at 6:53 AM

This video is a 2 minute 19 second excerpt from Davis Mayor Joe Krovoza's City Council remarks in support of postponing demolition of the WPA building in Central Park.
For a full screen view, click in the lower right-hand corner.
This video can also be seen on YouTube at:  http://www.youtube.com/watch?v=ctI8A4nBF6Y

Hypocrisy Plaza: The Plan to Replace Authentic With Sham History in Central Park (18) 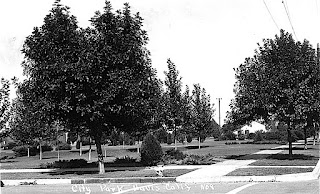 We have all heard variations on the joke describing developers destroying authentic, historic places in order to replace them with ticky-tacky housing and strip malls.
The joke part is that developers sometime--in an ironic perversion--name a development for the place they have just destroyed. A demolished real thing is exploited to legitimize a shoddy new thing.
Read more »
Posted by John Lofland at 12:45 PM