The “Christmas Festivities” Display at the Hattie Weber: As Much About Us As About 1898 Davisville? (32) 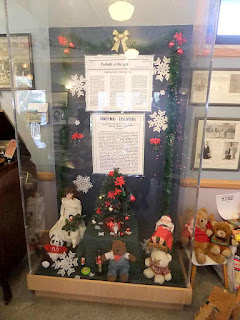 For a number of years, a snippet from a Davis Enterprise story dated December 30, 1898 has been prominently displayed at the Hattie Weber Museum of Davis during the holidays.


Titled “Christmas Festivities,” the Christmas Eve scene and performance at the Presbyterian Church are described, as can be read in four reproductions of it in this post (images 2 through 5).

This year, the large-size version of it has even been placed in a kind of altar to the holidays. (Image 1)

Its long-term veneration and the resonance it seems to have prompts me to reflect how items do or do not achieve such iconic status.

Let me try to address this puzzle through recalling a few principles of historical narrative. I will then apply them to the snippet.

One, the raw material of history consists of infinite episodes, snippets, and whatever.

Three, the items appearing in narratives are not random samples. Instead, selection is guided by the selector’s knowledge, preferences, feelings, and other factors.

Four, in view of these three principles of 1) infinite facts, 2) extreme selection, and 3) human filters, there is a high likelihood that any datum presented to us as “history” communicates as much or more about the “historian”--about “us”--as it does about the people supposedly reported on--the “them.”

Let me now relate all this to the snippet titled “Christmas Festivities.”

Several years ago, Lyn Lofland, Dennis Dingemans and I embarked on a project to “rescue” the 164 “Portraits of the Past” columns Joanne Larkey published in the Davis Enterprise between December 1969 and May 1973.

In the course of this project (which remains uncompleted), we read Larkey’s columns and of course chatted about several of them.

The fourth of the 164, dated December 26, 1969, summarized and quoted 1898 Davis Enterprise reports of Christmas in the village that year.  That column is reproduced in Image 2 in the rough, paste-up form we first read it. It is also seen as the top display item in Image 1 and is shown enhanced in Image 3.

The column struck all three of us, and Lyn Lofland in particular, who drew attention to the  “Holiday Festivities” quote from the Enterprise, in it. I have boxed it with red lines in Image 2.

That “Holiday Festivities” snippet circulated among people involved in the Hattie Weber. Jim Becket was at one point organizing a Christmas display for the museum. He thought it would be appropriate to display an enlarged version of it next to a tree decorated in the spirit of the tree described in the snippet.  He asked me to prepare an enhanced large-scale version of it and of the Larky column and I did.  Both are seen in Image 1.

(A reproduction of the original “Holiday Festivities” text as it appears in the Davis Enterprise microfilm is shown in Image 4. The enhancement is seen in Image 5.)

What remains mysterious, at least to me, is why and how those of us reading these (often crudely presented) materials “latched on” to “Holiday Festivities.” Notice that the Larkey column reports a variety of other Christmas activities in the village. And, entire issues of the Davis Enterprise from that 1898 season provide abundant other, candidate materials.

But, no, something about that particular snippet captured attention--and continues to do so. As such, I think it says as much about us as people in contemporary Davis as it does about people in Davisville in 1898.

I am, though, hard pressed to say what it says beyond the obvious things also said about other yesteryear-themed cultural productions--nostalgia, “simpler times,” and all that.