The Davis Progressive Era From Below: A Reflection on Bill Cavans’ DavisWiki Notes (45)

“Everyone knows” that Davis’ population began to explode in the ’60 and ‘70s and that a new “progressive’ and “green” era crystalized.

A good deal has been written about public level political expressions of this era--its environmental policies and signature features such as Village Homes. Among other places, this level is chronicled in Mike Fitch’s rich Growing Pains: Thirty Years in the History of Davis.

Depictions of the public level of an era such as the Progressive one in Davis raise, appropriately and in turn, questions of how “deep” into the population at large it reached.

Was that era mere effervescence and seen mostly or even only among elites who gained control of the apparatus of pubic expression? Or, did it express matters that ran deeper and wider into the population more generally and at large in Davis?

Happily, this is a manageable and answerable empirical question. Good and thorough historical inquiry could provide an answer. The task mostly involves looking into what Davis residents not notably involved at the “public level” were doing and thinking.

One important and easy source of data is the accounts people write of themselves. This brings us to the notes recently published on the DavisWiki by Davis Progressive Era resident Bill Cavans.

My reading of his notes--reproduced here--suggests that Davis had a significant in-migration of ethically and politically sensitive baby boomers who interacted with one another on an array of matters, creating a rich, fermenting brew of “progressive” ideas and activities at the “grassroots.” The ferment Caverns describes relates to and even overlaps with public level Davis, but extends well beyond it.

Davis grew from about 10 to 35 thousand people between1960 to 1980. Some 25,000 new people--many of them young baby boomers--poured into a small but exploding town. Perhaps only a few thousand were animated in the fashions Cavans describes. But that order-of-magnitude was sufficient to germinate a lush grassroots garden. That garden may not have “caused” the Davis Progressive Era. But it surely also did not detract from it and likely even fostered it.

The Cavans’ report is, of course, only one account and one form of evidence. Much more data of various kinds are needed solidly to answer the question. 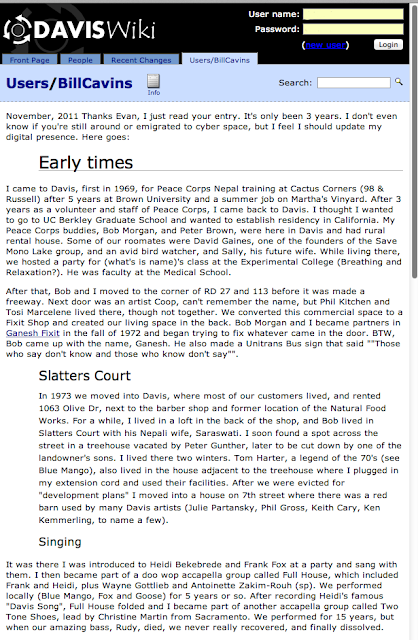 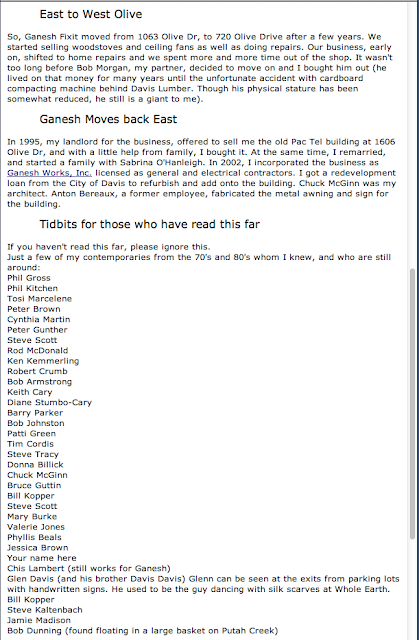