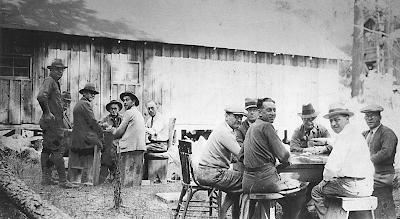 The obituary of Gordon Anderson posted last week (# 64) mentions that he was a charter member of something called the “63 club” that organized an annual fishing trip.


That reference brought to mind a photo titled “The ‘Davis ’63 Club’ -- About 1930” that I came upon in UCD Special Collections some years ago. It had puzzled me, but Anderson’s obituary and other things I have learned begin to clarify it.

First, although the photo appears, at first glance, to be a spontaeous, candid snapshot, closer inspection suggests it is quite carefully planned and staged. Evidence of this is in the fact that every face is clearly viewable, something that rarely if ever happens in spontaneous snapshots and is hard to achieve even in posed group shots.

Second, the names of the people provided with this photo are almost all quite familiar to Davis history buffs. From left to right they are (as worded on the back of the photo):
C. A. Maghetti,
Gordon Anderson,
Sam Brinley,
Sam Beckett,
Ted Barger,
Edmund McBride,
C. F. Dixon,
Forrest A. Plant,
Dr. Wilfred Robbins,
Ira Smith,
Clarence Williams,
Dr. Thomas Cooper, Sr.

More than familiar, this is a virtual roll call of the Davis civic elite of the 1930s.

Third, independently of this photo, I have been working up a timeline roster of major shapers of Davis from the town’s start to today. In the current draft of it, I describe 50 “major shapers” arrayed across 15 decades of Davis history.

I am surprised and amused to observe that my array includes four people seen in this photo: Maghetti, Anderson, Brinley, and McBride.

Fourth, this photo and the “’63 Club” bespeak a very high level of camaraderie and cohesion among the most powerful and influential people of 1930s Davis. This Davis elite had, perhaps, even its own small-scale version of the famous Bohemian Club.
Posted by John Lofland at 8:08 AM