The impending demolition of the structure at 337 D has prompted my fellow Davis history buff Rich Rifkin to lament that there will be “no more physical legacy of the Penas in Davis” and that 337 D is “the last physical record of the historic Pena family in Davis.”

Let me set Rich’s mind at ease. The fact of the matter is that the “physical legacy” of the Pena family survives 337 D in at least four ways.

First, several members of that family are buried in the Davis cemetery. As I understand it, burial of the kind seen there is what physical legacy is very much about.

Second, a recent online phone directory for Davis lists seven people with the name Pena, at least a few of whom are likely members of the Davis branch of the family. That seems a pretty solid physical legacy.

Third, a major street--a drive no less--is named Pena in honor of the family. 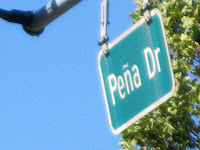 Fourth, one might narrow one’s lament to the lack of a house that has “the Pena surname tied to” it. No other house  “is called by anyone ‘the Pena house,’” Rich has written. But this, also, is not true.

So, do not fear, Rich. The Pena physical legacy is not confined to the structure at 337 D.