I guess it is inevitable that in a town with thousands of academics at least a few of them will practice their trade on the town itself. And this extends to the children of these academics who become academics.

Adding once again to the growing body of scholarly treatments of aspects of Davis, we now have a contribution by Davis-reared son-of-a-professor Gordon Douglas, a 1999 Davis High grad who earned a BA at USC (International Relations, ’03) and an MA at each of LSE (Global Media, ’04), USC (Global Communication, ‘05), and Chicago (Sociology, ’08).

His online vita reports that he expects to complete his Ph.D. in Sociology at Chicago in the summer of 2013. The article I describe here is apparently a master’s project at Chicago.

On his Sociology “student profile” page, he says, “I divide my time between New York, Los Angeles, and Chicago,” so I guess Davis is now out of the loop.

More information on him by him is at:
http://home.uchicago.edu/%7Egdouglas/home

In the methods section of his article, Douglas tells us he spent the summers of 2007 and 2008 in Davis gathering data on the Covell Village and Target campaigns. 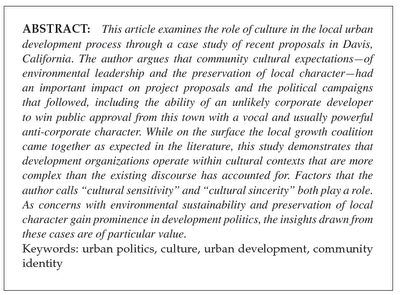 His report is organized as an answer to the question of why the Covell Village development project failed at the polls whereas the Target proposal won. Here we need to know that he is a budding student of “culture” as a scholarly area and, like the proverbial kid who is given a hammer, everything needs pounding. In his case, we are offered an explanation consisting of variations in two “cultural” variables (while also acknowledging that other variable are important).

These two variables are “cultural sensitivity” and “cultural sincerity.” The Target campaign is claimed to have had more of each of them than the Covell Village campaign and this, in part, explains why the former won and the latter lost.

By “cultural sensitivity” as a variable Douglas means the degree a campaign molds its message and its project to take account of the expectations of the voting public. By “cultural sincerity” he means the degree to which the voting public, on its part, perceives the proposing developers as being truthful in what they claim and trustworthy about what they will actually do if the project is approved.

The abstract and a summary quote I reproduce with this post explain his paper in his own words. The complete text of the article is at:

So far as I know, Mr. Douglas has the distinction of being the first Davis-reared person to produce serious intellectual work on Davis. Someone please let me know if this is not correct.

But, I think we can predict that he will be far from the last. In particular, I think we can expect to see a number of intellectual productions of a literary character, likely fiction, set in Davis or otherwise about Davis. Given the features of Davis we all know and love so well, I think a fair number of these will be satirical.