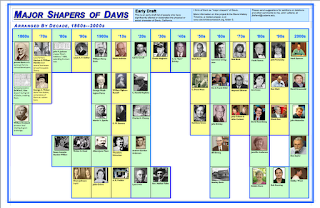 When I read the ordinary lists of prominent and important people in the history of Davis, I am struck that a number of indiividuals I think have been important in shaping the physical and social landscape of the place are commonly not included.


Yet, these and other excluded people have clearly stamped major physical and social marks on the Davis we see today.

One theory of why such people do not “make the list,” is that those rosters are meant to celebrate things we like about the Davis past rather than to call attention to conflicts and less-than-laudable episodes.

But if we put such pieties aside, what would a compilation of major shapers of Davis--“no holds barred”--look like?

Certainly, a broader list would likely overlap with the usual rosters because the usual people are also often major agents of changing the Davis physical and social landscape.

In addition, some of these “usual people” are also agents of major changes in the sense that they altered the existing Davis by greatly elaborating and strengthening major patterns that were already dominant. This effect has been especially visible in the activities of three long-time editors of the Davis Enterprise--William Henry Scott, Chelso Maghetti, and Debbie Davis.

Among others, Calvin Covell and Bob Dunning were, for example, pre-eminent articulators and embellishers of the Davis mythos of their respective periods--making them “major shapers.”

So, using this major agents of change--“major shapers”--frame of reference, I have mulled the history of Davis and assembled the rough and tentative roster arrayed by decade on the accompanying chart. I reproduce it here in fairly low-resolution form.  A higher resolution (and downloadable) version is at:

I must stress that this is a preliminary sketch presented for purposes of reflection and discussion. Even though it needs revision and elaboration, I hope it nonetheless serves the purpose of suggesting a broader basis on which to create rosters of historic Davis personages.