Variations in the Degree to Which Groups Celebrate Their Histories: Reflections Prompted by Co-op History Festivities (81)

Having noticed this possibility, I began then to wonder if groups in general might vary in the degree to which they “do history”--that is, regularly celebrate their pasts.

1. With regard to Davis co-ops doing history, in 1997-98 considerable effort was put into creating a “Davis Cooperative Centennial.” There was a major exhibit at the Hattie Weber Museum of Davis. The plaza in front of the Davis Food Co-op was outfitted with a symbolic reference to the Toad Lane co-op founding location and a “Cooperative Century” clock was installed. On the same day as the dedication of the 5th & G Federal building, which drew high-level federal officials, these
same officials were recruited to go up the street to participate in unveiling a plaque-commemorating placement of that clock (images 1-6).

And, of course, we have recently seen another season of calling attention to the longevity and other aspects of Davis co-ops (images 7-10).

2. History is something all groups have, but not all of them “do” equally. Some “do history” in the sense of organizing activity to call attention to it much more than others. How might we account for this variation? Here are a few suggestions.

----> Some groups are blessed with history entrepreneurs and some are not. By history entrepreneurs I mean one or more group members who take it as their task to be knowleable about the group’s history and to promote it. You obviously cannot do history if no one knows what it is--and such seems to be the case for a fair number of groups.

----> Above a certain group size, history gets done because there are resources sufficient to assign staff to organize its expression. As is often and sometimes correctly said, “thank goodness for staff.”

----> Cross-cutting all this is variation in the degree of morale and esprit de corps we find in a group. Groups vary in the degree to which they are at any given time dispirited or spirited. A group atmosphere of being dispirited can overcome the best efforts of history entrepreneurs, professional history staffs, or the group’s location relative to the mainstream.

Even something as seemingly major as a centennial year can evoke only apathy in a sufficiently dispirited group, as seems to be case for at least one Davis middle-mainstream group now approaching a centennial moment. (Factors affecting level of group morale is of course an entirely different topic.) 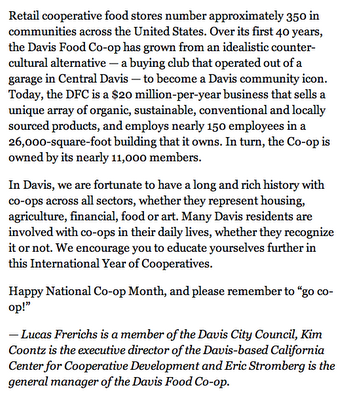