The Unique Historic Preservation Task of the College Town: Commemorating Scholarship Not Only Citizenship (92)

In most and ordinary communities, historic preservation is very much about commemorating outstanding residents (as well as, of course, signal events and remarkable architecture).


For many, if not most, communities, it is fine to stop with recognizing local citizenship. But a few communities are different and have an unusual additional task and obligation, I think.

COLLEGE TOWNS AND SCHOLARSHIP
That type of community is what we commonly call “the college town,” meaning it is the home of an institution of higher education, one that is sometimes a research university.

Research university college towns are peppered with residents who are scholars (aka scientists, researchers) who are oriented to trans-local and cosmopolitan fields of research and learning. Some few among them have discovered or invented knowledge that is of very high significance in the wider scheme of things. But, that significance may be unknown and of little or no immediate consequence in the local community where those scholars reside.

Even though these people may make little or no local impact, they are nonetheless fundamentally what the college town is about--even a town’s literal raison d’etre. 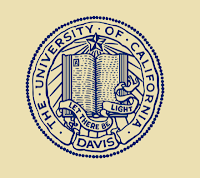 THE TASK AND NEGLECT IN DAVIS
Davis is, of course, such a college town. A significant number of Davis’ oldest homes were once the residences of scholars at UC Davis who were major architects of modern agriculture and other areas of knowledge, especially in UCD’s formative decades of the aughts, tens, twenties, and thirties.

The presence of significant scholars in these older homes is integrally what Davis has been and is about. Our heritage is not only citizenship, it is also fundamentally scholarship.

Unfortunately, we have not yet properly recognized this special kind of historic preservation task. When a home in the “1917 City” has come under Davis’ Historical Resources Management Commission scrutiny, few people have cared who lived there, although a few outstanding citizens such as Judge William Henry Scott have been accorded citizenship recognition.

A CONFESSION
I must confess I have been slow to recognize this special preservation task. Indeed, I only began to see it as a somewhat accidental byproduct of other research I was doing.

A couple of years ago, I decided to document the histories of the 16 homes on the block where I live. In this process, I discovered at least three of the many UCD researcher/scholars who lived there were quite significant figures in their fields and of a stature in their realms on a par with or above people like Calvin Covell and William Henry Scott.

These were professors Asmundson, Cruess and Bringhurst, who can be read about in the brief bios of them reproduced here from publication in my booklet on the E-500s block.

Since then I have become more sensitive to the possibility that such scholars lived on many blocks of the “original city” in the formative pre-WWII decades. This area still contains on-the-order-of 300 Pre-WWII homes. Among them, significant scholars resided in perhaps a couple of dozen.

Yet, we have hardly begun to think about commemorating scholarship, much less developed systematic means of identifying and reacting to these sites. 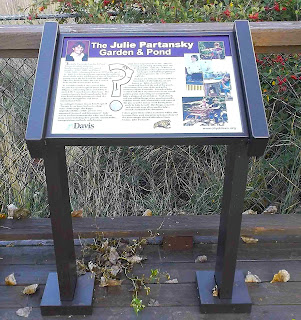 A recent case in point is, of course, 315 D Street, where the question of who lived there per se--citizen or scholar questions aside--did not even come up in a serious way in the course of deliberations (post # 90, this blog).

MODEST BUT EFFECTIVE COMMEMORATIONS
Let me hasten to declare that I am not implying that every home resided in by a significant scholar should be made a “landmark” or “merit” historical resource. Although that might be appropriate in truly exceptional circumstances, I think fitting action would more commonly consist of modest and tasteful site installations with text and graphics depicting a location’s importance.

I have in mind, for example, the kind of display recently installed in North Star Park at what is now the Julie Partansky Pond. I reproduce a snapshot of it here.

It seems to me that installations such as the Partansky one focusing on significant local citizens and scholars should dot the “original city.”

In the same way that the famous “blue plaques” enhance England, our own version could contribute greatly to the cultural texture of Davis as a town rooted in a rich history.