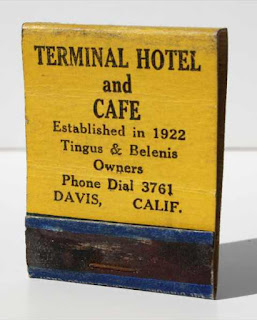 Some years ago I wrote a book on the historic Terminal/Aggie Hotel built at the southeast corner of 2nd and G streets in 1927 and demolished in 2000. (The Chen Building is there now.)

As part of that project, I attempted to find and to photograph items relating to life in the ground floor cafe and the second floor hotel. I had in mind such artifacts as menus, matchbooks, and images of the interior rooms.

Despite varied efforts, I was never able to find, much less to photograph, a single such item.

A few weeks ago and amazing to me, an antique paper dealer in Smithville, Texas put a Terminal Hotel and Cafe matchbook on online auction.

I won the bidding and photographs of that prize are shown here. 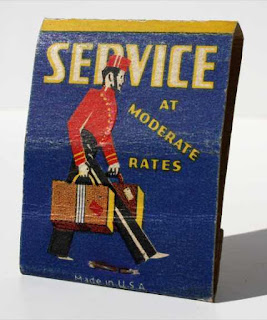 In small type, we see the Diamond Match Company printed it at its then-plant in Chico, California. It is difficult to date exactly, but it was certainly printed in 1927 or later because that is the year the cafe was expanded into a hotel building. Tingus and Belinis ceased co-ownership in 1946.

The design seems clearly generic rather than custom. The type and text on the opening-flap side have the look of a standard set-up done by Diamond Match Company printers. The “service at moderate prices” graphic on the reverse side seems boilerplate.

If the above characterization is reasonably accurate, we have one more bit of material suggesting that a central Davis institution of the ‘20s and ‘30s was a rather modest affair. UC faculty may have been key players in Davis, but they clearly were not cavorting in anything even remotely resembling the elegance of the The Faculty Club at Berkeley.* 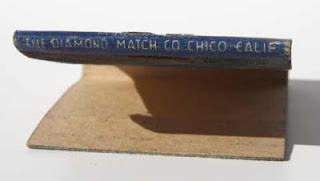 This matchbook leads me to the larger topic of distinctive advertising and other items produced by historic Davis businesses. We know as a general matter that businesses tend to produce items bearing their names. These commonly include calendars, key rings, and, historically, matchbooks and ashtrays.

Believing a substantial amount of this kind of material was produced by Davis businesses, I have been alert to identifying it in various venues. But, mysterious to me, I have found very little of it.

I have begun to think that people have treated these artifacts in the same way they have treated old telephone books: throw them away when they are no longer current.**