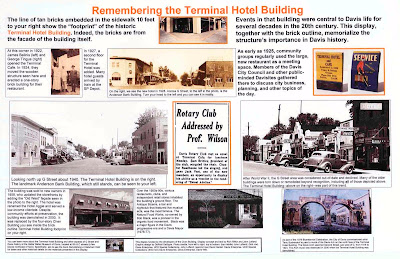 Rich Rifkin and I have drafted an 18 by 24 inch public display titled “Remembering the Terminal Hotel Building” that will hopefully be installed at the northeast corner of 2nd and G Streets.

We are concerned that viewers will identity problems with the pictures or text after it is installed.

Hoping to avoid post-installation changes, we are asking as many people as we can to read the display in draft and tell us about problems before installation.


We urge anyone who so desires to inspect this draft for whatever errors of fact, interpretation, judgment, spelling, grammar, or whatever that it may contain.

Please send what you identify to Rich Rifkin at rich_rifkin@yahoo.com or to me at jlofland@dcn.org.

This is truly a draft. It contains pictures and text, but it has not yet been made into a designed graphic. Therefore, it looks “clunky” and awkward. But that will go away when a graphic designer works it over--although the pictures and text will remain the same (except for problem corrections).

Moreover, because of limits on the size of files that can be transmitted on the Internet, this draft is relatively “low resolution.” That is, the pictures lack detail and are fuzzy when viewed closely. In the actual display, the pictures will be detailed and sharp.

You can read it as posted here or you can download it at:

CONDITION 15
A reader should well ask, “How is it that Rifkin and Lofland are designing such a display? What is the authority and justification for this?” Here are answers to these questions.

When the developers of the Chen Building acquired a building permit in 2001, condition # 15 required that they “work with the city to incorporate into the building or the adjacent right-of-way, a didactic display of the Terminal Hotel Building as well as the ‘Davis Arches mural’” (graphic # 2).

There were two efforts to fulfill this requirement, but neither was completed.

Developed by the City’s preservation official of the time, the first plan was to attach a set of pictures to a wall in the Chen Building lobby and, as well, to focus the images on G Street as much or more than the Terminal Hotel Building. For reasons not clear to me, the plan was never executed.

A few years later, a Historical Resources Management Commission Commissioner developed a plan to attach a metal plaque to an exterior wall of the Chen Building. This plan, also, was not carried through.

To my knowledge, there were no additional efforts until now.

THE PARTANSKY PEDESTAL
A few months ago, a pedestal-style display memorializing Julie Partansky was installed at what is now called the Julie Partansky Pond (graphic 3).

Rich Rifkin and I exchanged remarks on how the pedestal was a wonderful innovation in Davis history commemoration.

Recalling the moribund Terminal Hotel Building display project, I sent him a copy of condition 15. He responded that he had thought condition 15 required an inside display and that he was delighted now to learn that an outside display was allowed.

Putting this new knowledge together with the “Partansky pedestal,” Rich decided to mount a new effort to have a Terminal Hotel Building display. He asked me to join with him and I was (and am) happy to do so.

Our first action was to meet at the northeast corner of 2nd and G and to consider the pros and cons of a half a dozen reasonable locations for a display pedestal.

Equipped with photographs of possible locations, Rich drew up a multi-step plan of action and organized a meeting with Community Development Director Ken Hiatt. Director Hiatt agreed to move forward with the possibility of a display.

So, we have now reached the point of presenting the draft you see posted here.

As indicated at the outset, we seek to get the content of the display as correct as we can before proceeding to a graphic design and to installation at 2nd and G.
Posted by John Lofland at 7:16 AM