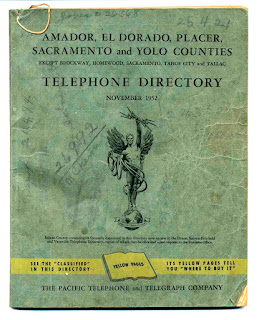 This post focuses on two topics, the scarcity of old telephone directories and the small size of the 1952 Davis telephone listings


THE SCARCITY OF OLD TELEPHONE DIRECTORIES
A number of years ago I stumbled onto a 1957 Sacramento Valley telephone directory for sale in a Grass Valley used bookstore. Along with many other Sacramento area communities, the directory included Davis telephone listings. Intrigued, I bought it.

I found it very useful and since then I have bought other old directories that include Davis. This is a total of only six at this time, including the one for November, 1952 that I just acquired and that I feature in this post.  (Their years range from 1939 to 1982.)

Many thousands of these directories were printed with some frequency. But they are scarce perhaps because people have been exceptionally compliant with telephone company admonitions to discard out-of-date volumes!

I base this assessment in part on conversations I have had with antiquarian and rare book dealers. These are people with much more than ordinary sensitivity to rare printed items because they haunt places where rare “paper” is discovered. They tell me they very seldom see telephone books.

(Lest people think this source of historical data is lost, let me also report that microfilm copies of all telephone books with Davis listings are in the California State Library. But that is too easy and lacks the authenticity and convenience of the real thing.)

THE SMALLNESS OF THE DAVIS DIRECTORY
One of my favorite myths of Davis history is the conception that Davis was a town of some appreciable size in its early decades. I have gone to some trouble to correct this error* and I want to do so again here.

This effort at correction takes the form of reproducing in its entirely the telephone listings for Davis in November, 1952.

There are 14 full columns of listings, each with about 100 entries, plus two partial columns with a total of just over a hundred. This comes to about 1,500 entries.

The lists in these years are so short that I have been able to use them as reverse street directories. That is, one can find who was living at a given address by simply reading the list until one comes to the address (if the address had a phone that was listed, which is often the case in the kinds of searches I do).

_____
* Two of these efforts appear in the sidebar to the right on this blog. One it titled “Tiny Davis.” The other it titled “Pre WWII Demolition.”
Posted by John Lofland at 8:42 AM