Jake’s Addition on Russell Between South Campus and Oak (107)

This is the second in a series of posts on Jake’s Addition on Russell and the Howard/Abbott House at 445 Russell. The next post will be the HRMC agenda announcing a March 18th public hearing on the historical significance of that property. 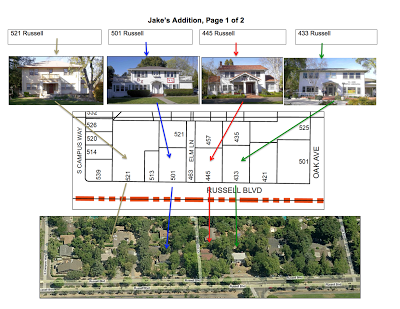 He subdivided the Russell-fronting portion into four main lots that were sold to prominent UCD professors for the purpose of building the four substantial and “mansion-like” buildings shown here. In an era of very slow expansion in Davis and just before College Park, this venture had the informal name “Jake’s Addition,” Jake being John Jacobson’s nickname. 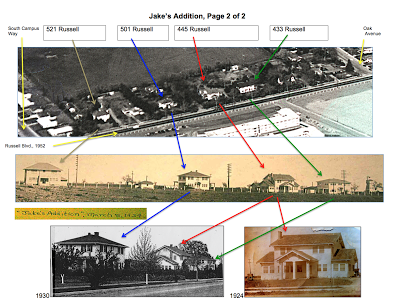 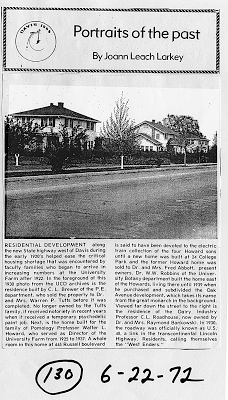 The purpose of this post is help bring attention to, and to describe, this previously little-recognized expansion of Davis in the earlier 1920s.

I do this in two ways.

One, I have assembled a two-page “visual history” of the addition that shows it today and at some moments in the past.*

Two, the incredible Portraits of the Past series Joann Larkey wrote in the early 1970s continues to serve us well. In article number 130 published June 22, 1972, she describes “Suburban Development in the 1920s.” While much of the account is about College Park, she also provides substantial material on Jake’s Addition. 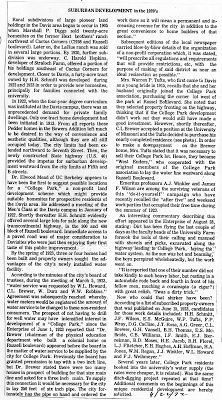 This is only an introduction. Great detail can be found in the just-released 56 page monograph by Historical Resources Associates titled Historical Resources Analysis Study of 445 Russell Boulevard, Davis, California, which will be available on the web soon and reported on in Davis History Today.