This post is the third of four, one each on four episodes of public debate on fluoridating Davis water.  An overview of the four is given in post # 120, May 26, 2013.

Within only a few weeks of their defeat at the polls on April 14, 1964 (reported in the previous post), members of the Davis Pure Water Committee began to organize an initiative drive to put fluoridation on the ballot.

If the amount of fluoridation coverage in the Davis Enterprise can be taken as a measure of what people were actually doing, I would say that the level of interest fell radically after the April election. In this post, I reproduce almost all the Enterprise reporting on it after the April election. As can be seen, it is minimal. I infer that a kind of exhaustion with the matter had set in--and that other public matters of many sorts became considerably more pressing.

The year 1964 has itself attracted attention as a turning point in American life. Among others, Jon Margolis has written of it as The Last Innocent Year, the year in which a certain kind of post WWII public consensus began dramatically to come apart. I reproduce text on and from from the Margolis book that conveys the gist of this thesis.

With this “turning point” year idea as a context, I thought it might be helpful to reproduce the rather elaborate 1964 “end of the year” summary published by the Enterprise on December 31, 1964. It is composed of four images with the twelve months as captions.

Given what we otherwise know about what was happening in the world and even in Davis in 1964, the litany of events given there is as interesting for what it leaves out as for what it includes.

To me, these lists of events in Davis in 1964--combined with those that should have been but were not included--suggest whistling past the graveyard combined with a strong dose of denial. 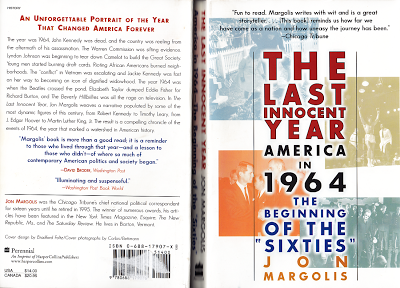