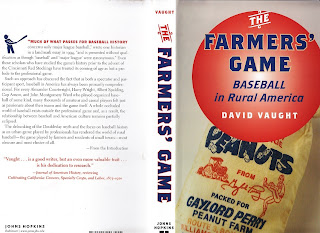 This is a second post on the theme: “The past is a foreign country: they do things differently there.”

In the first post on this idea, I highlighted reports of citizen reactions to the Winters-centered earthquakes of 1892 (post number 117, May 12, 2013).

This post associates the same idea with much the same period of Davis history, only this time dealing with the reported rapid rise of interest in the game of baseball among Davis area farmers.

According to American agricultural historian David Vaught in his book The Farmers' Game, the sons of failed gold miners turned wheat famers faced catastrophe as the grain market collapsed and they needed to take up fruit cultivation.

This major ag-economic shift conduced them to turn from the favorite sport of their fathers, which was horse racing, to the culturally more appropriate new game of baseball, which he claims fit better with fruit farming. This is, at least, my simplistic version of Vaught’s thesis, which is in his Chapter Two.

I reproduce some passages from that chapter in order to give Davis history buffs the flavor of his thesis. These passages are, of course, no substitute for the entire chapter--and the book itself--which I encourage people to read.

“The past is a foreign country: they do things differently there.”