In the early 1920s, someone climbed to a tall southern point on the UC Farm and shot a high-resolution panoramic photograph looking northeast over the campus.

A print of that photograph resides in folder AR-013 of the UCD Department of Special Collections. A low-resolution scan of it introduces this post.*

The UC Farm is the obvious topic of the photo, but “The Farm” is not what this post is about.
Instead, when we look closely at the area above and behind the Farm buildings, we see a panorama of Davis. That sliver of a view is the focus of this post.

I discovered this photo and this “in the distance” feature in 1999 and acquired a high resolution scan of it.

Not able to figure out how to best use or publish it, I have to this point done nothing with it.
I still do not know how best to use it, but I think it is time to at least call attention to its existence.

This “call” takes the form of enlarging and segmenting that background into seven panels that show the Davis “skyline” from east to west. These appear here as panels numbered 1 through 7.

In order to show how these seven relate to one another, I also present a screenshot composite of them arrayed as a panorama.

Below, I list some salient features I think are visible in the panels.

Panel 1
•  Vertically across the lower middle of the panel: The road called variously “The Highway,” Route 40, The Lincoln Highway (for six months in 1927), Russell Boulevard.

• Mid-distance area to the right: Area where College Park will be laid out in 1924. Panel 2
•  Left edge: Area where the eastern border of College Park will be located.

•  Horizontally across the mid-distance: The line of trees marks the approximate route of the future West 8th Street. 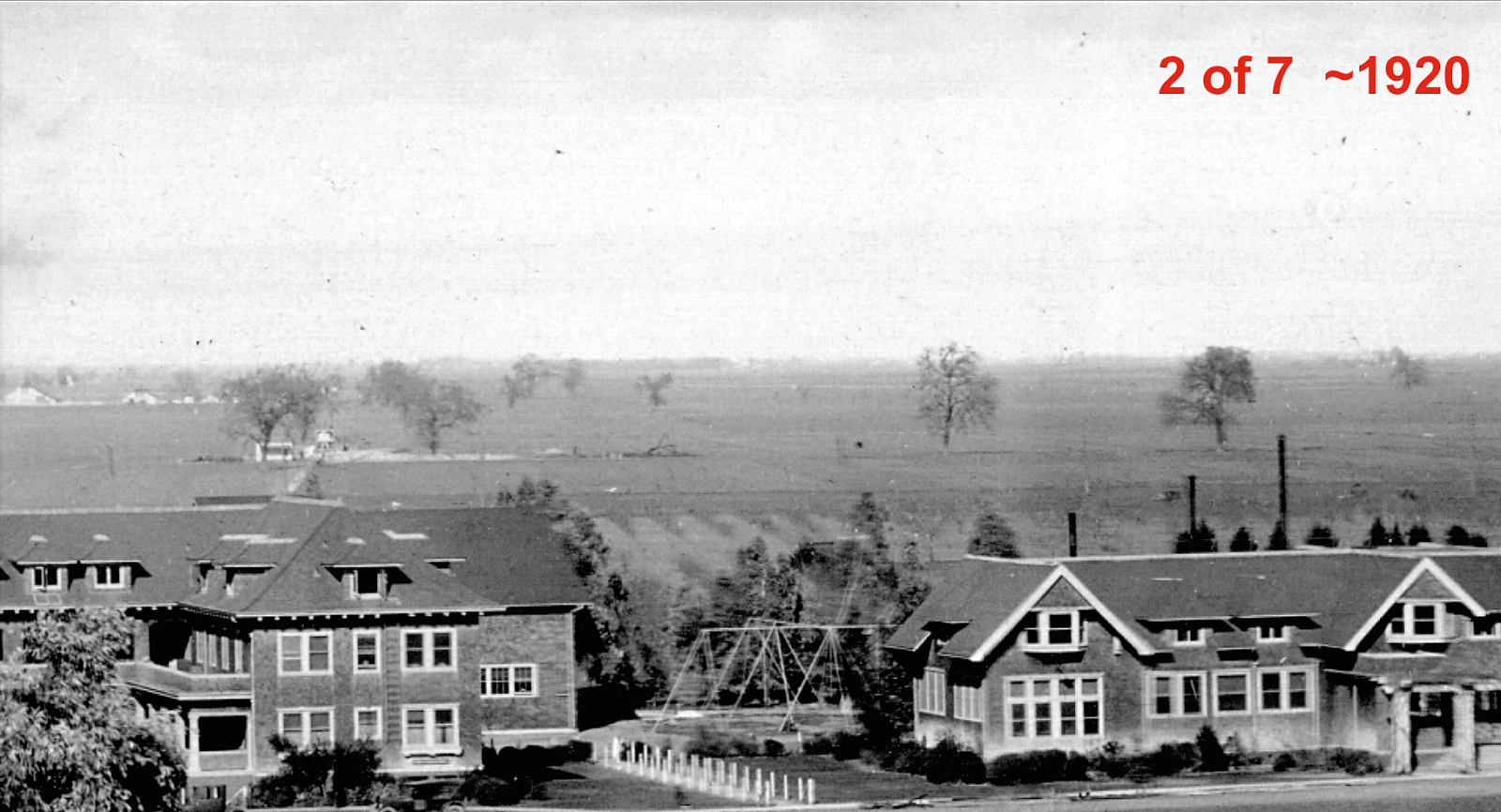 Panel 3
•  First house from the left edge: 440 A Street, corner of Russell and A streets, still standing and currently a sorority house.

•  Just above the UC Farm building on the right: Two rectangular buildings housing the Zeta Xi fraternity. When the high school is built in 1927, the structure on the right will be moved to the front area of the one on the left.

•  Above and between the two Zeta Xi buildings: 642 C Street. Shed used by A. R. Pedder in organizing construction materials for about a dozen Davis homes he built in the 1910-20s (demolished). 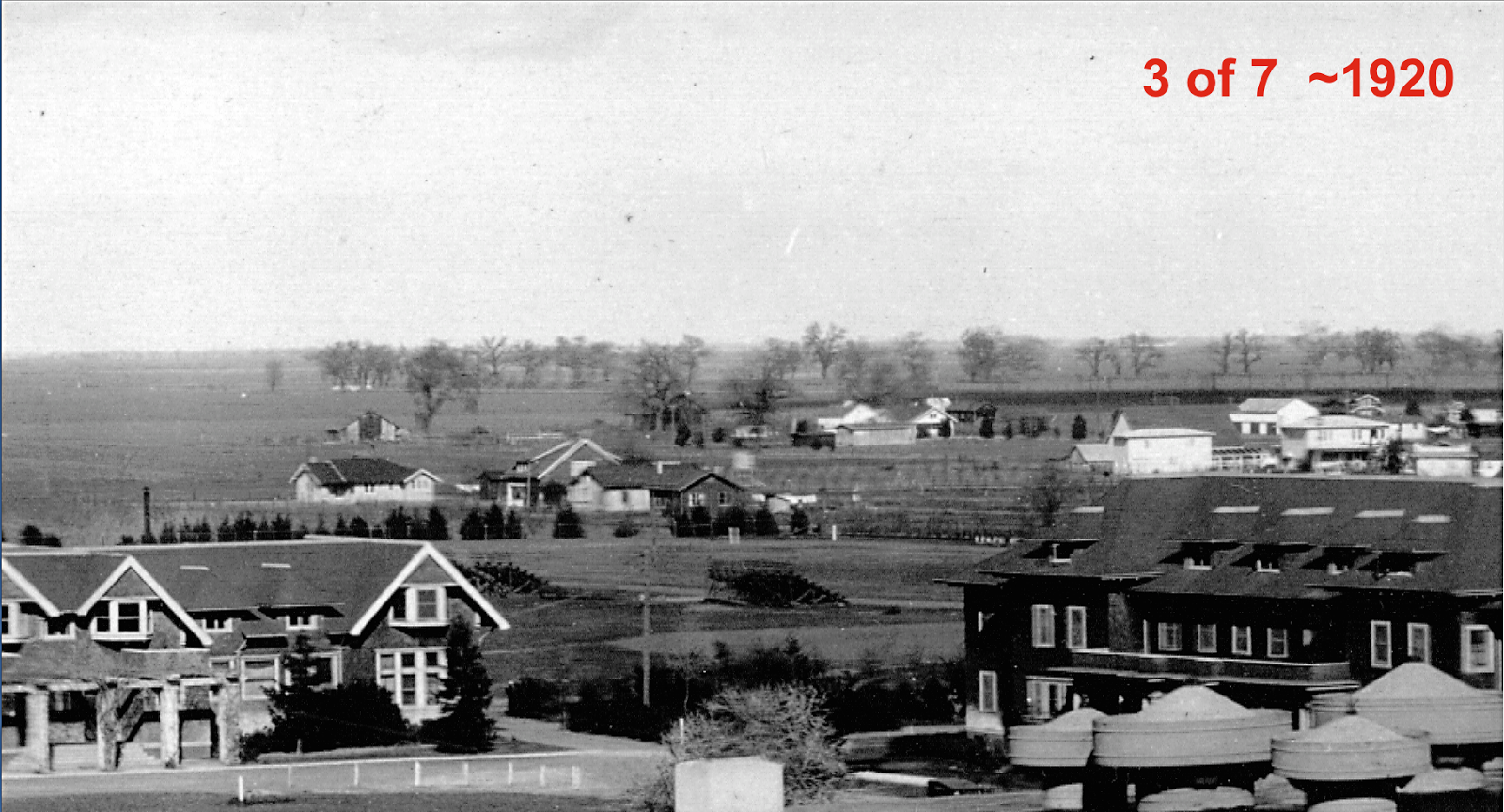 Panel 4
•  Beneath the water tower looming in the middle left distance: The Highway Garage at the B Street-Route 40 curve. It is located on property that will become part of the northwest corner of Davis City Park (later called Central Park). •  Right edge: 255 3rd Street, the University Hotel. Demolished and since the site of a succession of family style restaurants. 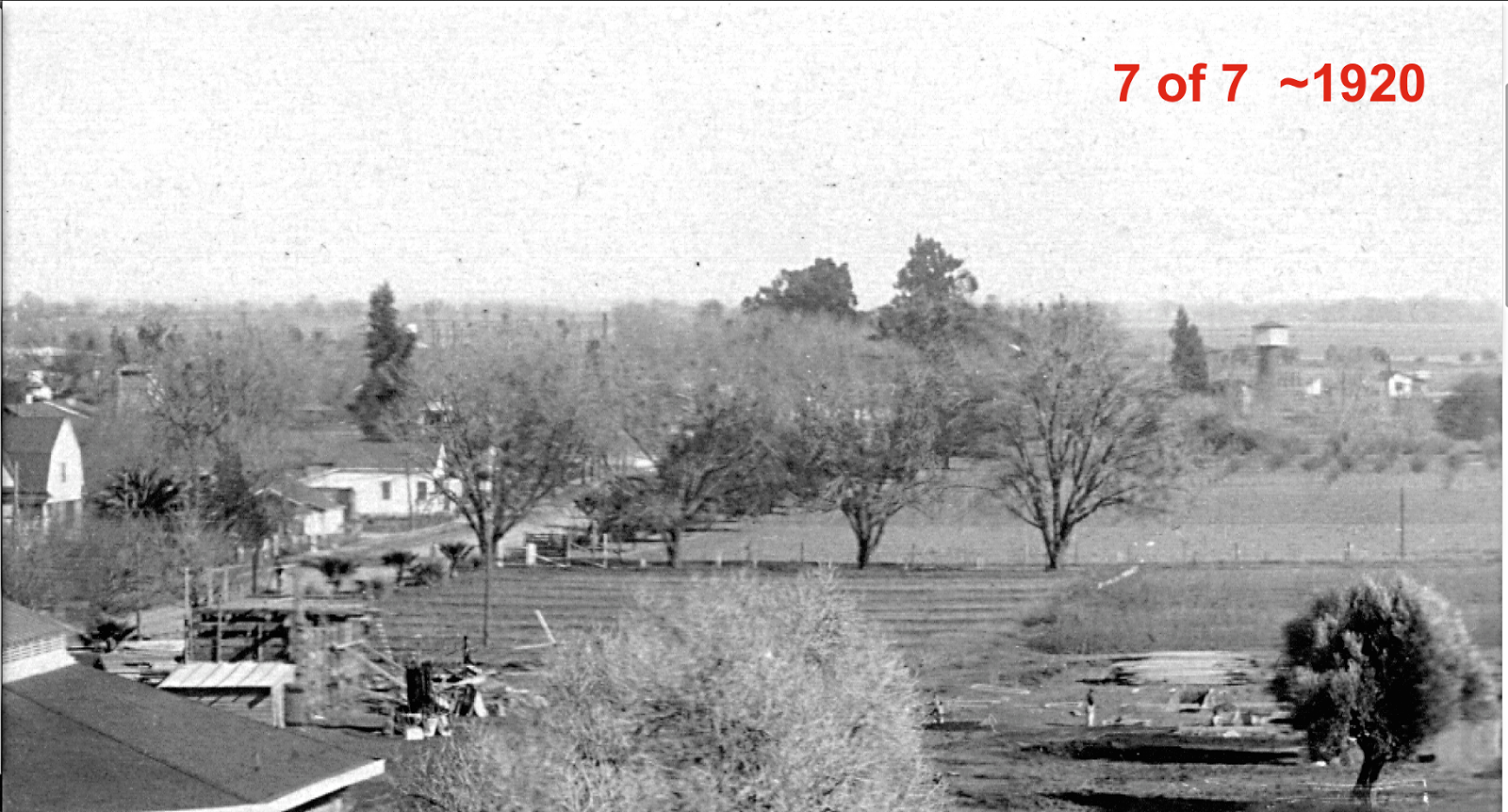 This panorama provides a vivid representation of what is otherwise and amply documented: Davis was a diminutive place with a small “footprint” before its transformation after World War II.

As part of this, the rate of growth was slow. For example, we can see that although the area north of 5th Street was laid out for development in 1913, nearly a decade later, only a modest number of homes have been built.


* Too wide to fit onto even the Special Collections large format scanner, the print was scanned in two parts. The line down the middle shows where I have fitted the two scans together and not tried to hide the seam with Photoshop tricks.
Posted by John Lofland at 5:56 PM