This post is companion to post number 148 published on this blog on March 18, 2014. The two posts share the features of:
-- presenting aspects of two wide-format photographs housed in UCD Special Collections folder AR-013 that were
-- created with high-resolution cameras from a high southern point on “The Farm” campus, and that are
-- examined here for a purpose not the main focus of the photographs.

In both photographs and as worded previously: “when we look closely at the area above and behind the Farm buildings, we see a panorama of Davis. That sliver of a view is the focus of this post.”

Like the other photo, I have enlarged and segmented that sliver in the background above the Farm buildings. There are six panels that show the Davis skyline from east to west.
In order to show how these six relate to one another, I present a screenshot composite of them arrayed as a panorama.

Below, I list a few of the features I think are visible in these panels. (I repeat text used to describe features also appearing in the early 1920s panorama)

Panel 1
•  Looking to the northwest: The area where Anderson Road will be is open land except for the “West End” or “Jake’s Addition,” which consists of the four homes now numbered 521, 501, 445, 433 Russell Boulevard and that are still there. If you look closely between the upper branches of the trees, you can glimpse three of the four spread across the panel.

The four homes are depicted in Davis History Today Post #107, which is here:
http://www.davishistorytoday.org/2013/03/jakes-addition-on-russell-between-south.html 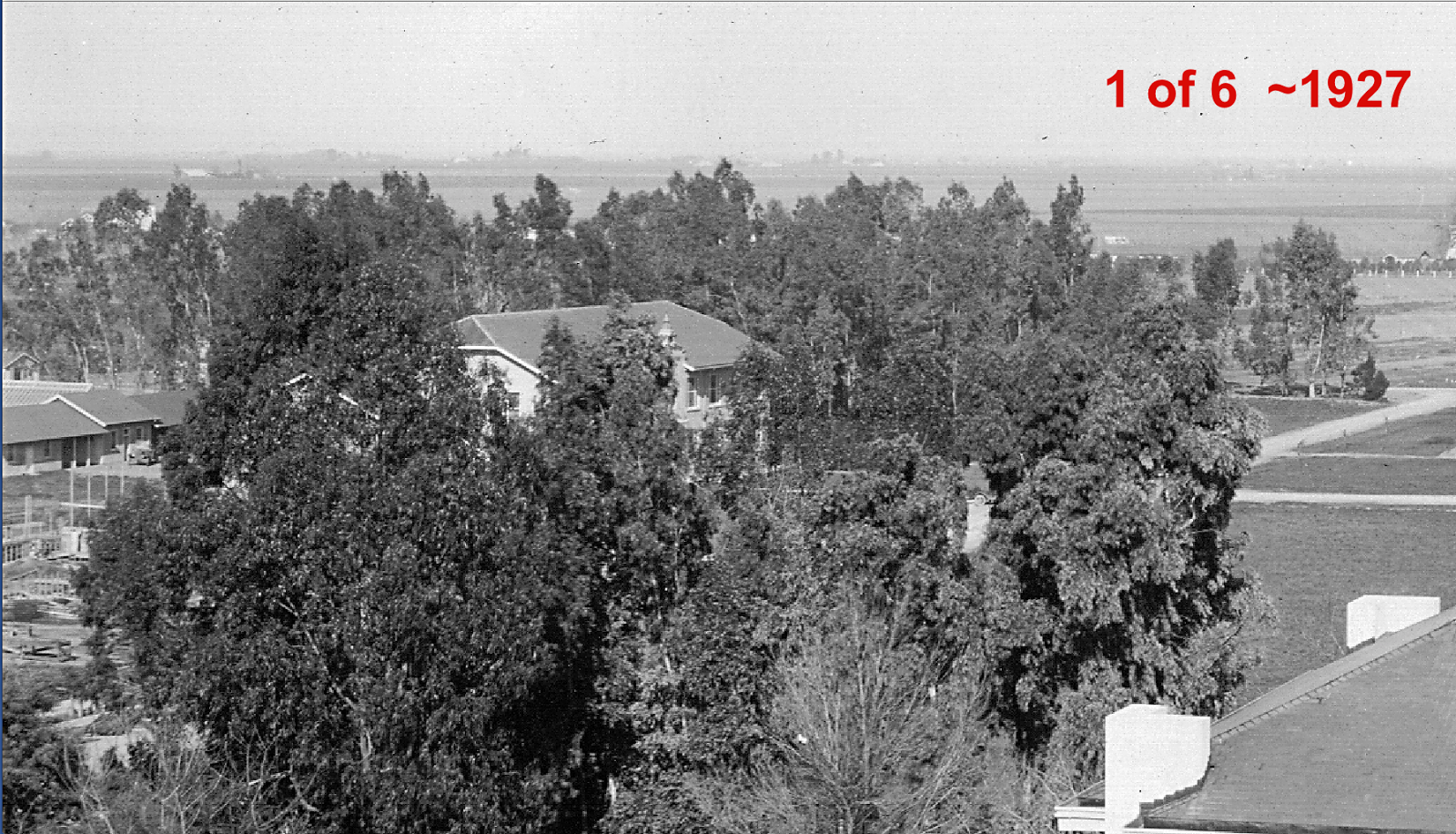 Panel 2
•  Vertically across the upper middle of the panel marked with white posts: The road called variously “The Highway,” Route 40, The Lincoln Highway (for six months in 1927), and Russell Boulevard.

•  To the left behind the first tree next to “the Highway:” The tank house of 433 Russell is just behind the left side of that tree.

•  In between the Tank House and the next house: Unidentified but what appears to be a barn.

• Two Story Home in the middle right facing and on the Highway: 327 Russell Boulevard, still standing. 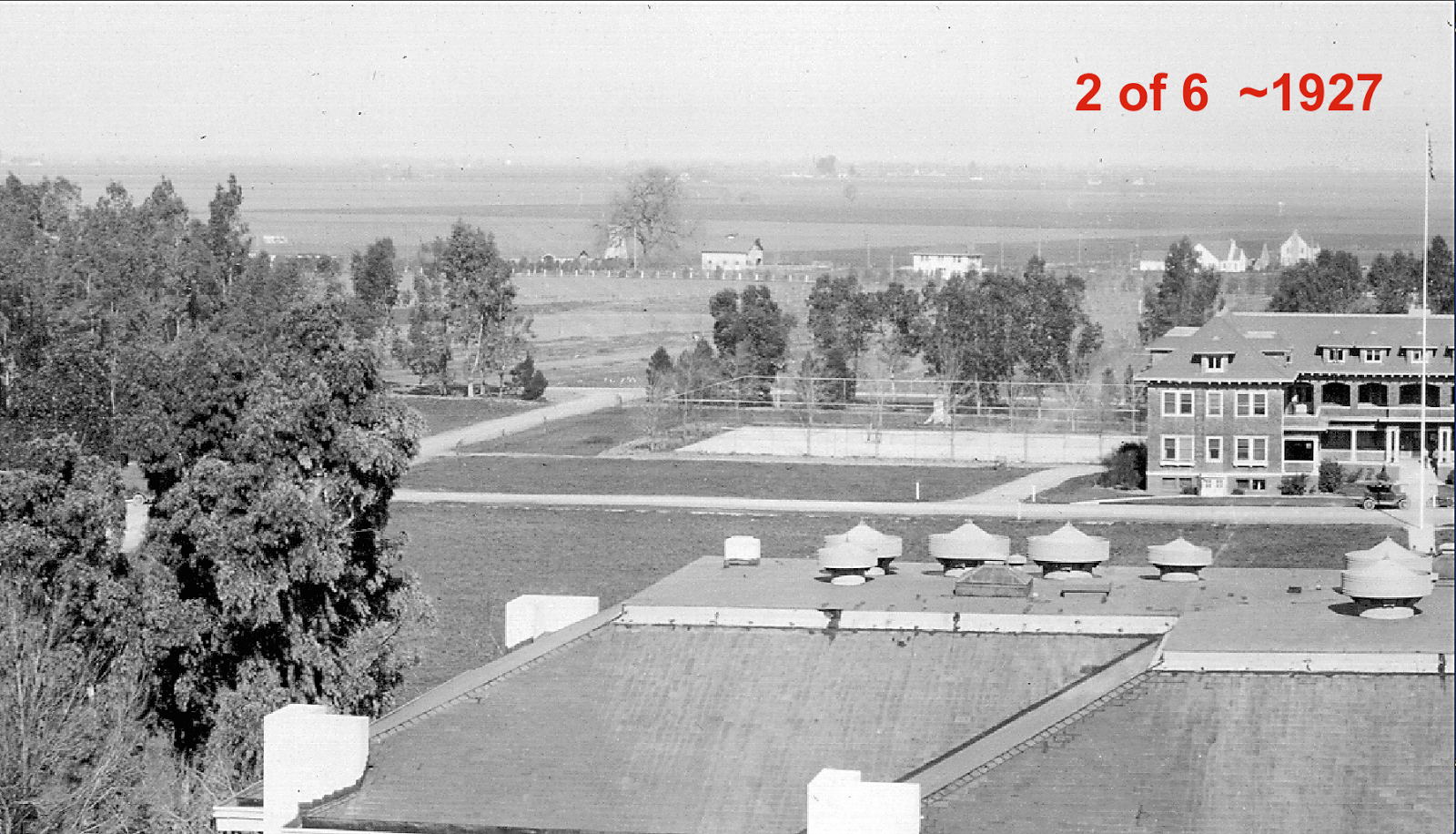 Panel 3
•  Home in the distance to the right of the flagpole: Likely 53 College Park, reported built in 1927

•  Just above the right end of North Hall: 225 Russell, home of the Professor Joseph Rosa family and now a sorority house.

This home is profiled in Davis History Today #110 at:  http://www.davishistorytoday.org/2013/03/new-information-on-rosa-home-at-225.html

• To the right of 18 and 20 College Park and farther in the distance: Cluster of structures near to the three trees is just north of what will become 216 West 8th Street. The building now at 216 West 8th Street--built in 1935--was apparently constructed as part of that cluster.

•  Horizontally across the upper right distance: The line of trees marks the approximate route of the future West 8th Street.

•  Two two story retangular buildings on the extreme right: The building on the left-- slightly closer to us than the one on the right--was moved here from the Davis High site in order to make way for the school. Both house the Zeta Xi fraternity. 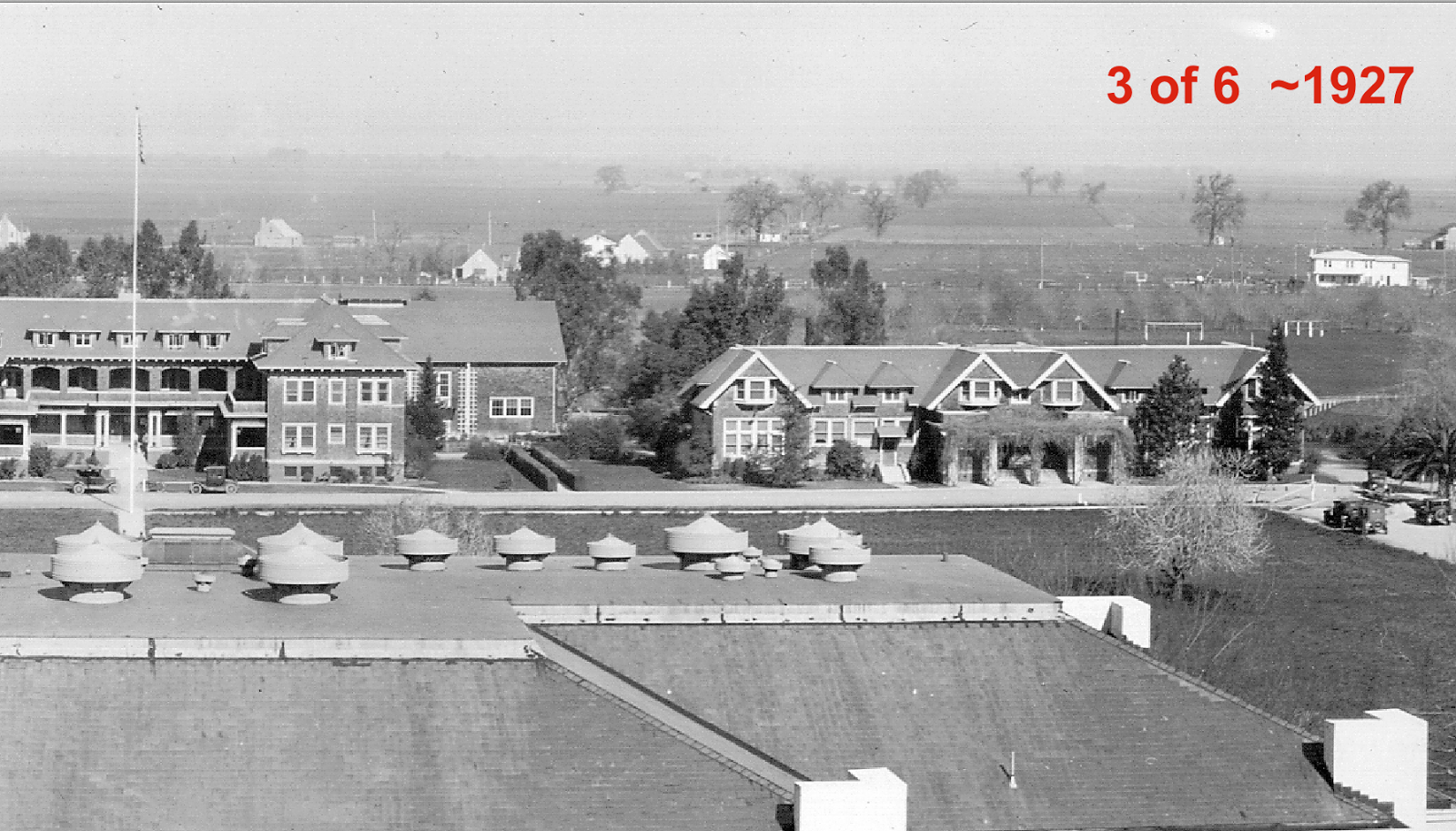 Panel 4
• Farther in the distance to the right of the Zeta Xi buildings: Complex of farm structures apparently belonging to world-renowned sheep expert Professor Robert Miller, whose home is seen on the right and is 749 B Street (which is still there). For a time, Professor Miller was shepherd to a flock of sheep kept on his land in that area.

•  Just below Professor’s Millers House to the right: 440 A Street, corner of Russell and A streets, still standing and currently a sorority house.

•  Large building with few windows to the high school’s immediate right: The original gymnasium building, which burnt down early on and was replaced by the gymnasium there now.

•  To the right and above the campus building smoke stack: 642 C Street, the shed used by A. R. Pedder in organizing construction materials for about a dozen Davis homes he built in the 1910-20s (demolished). Panel 6
•  Right edge: 255 3rd Street (northwest corner of 3rd & B): the University Hotel, demolished and since the site of a succession of family style restaurants.

•  Lower Middle of the Panel: Northeast corner of lst and A Streets, 203 1st Street, still standing and currently a fraternity house. 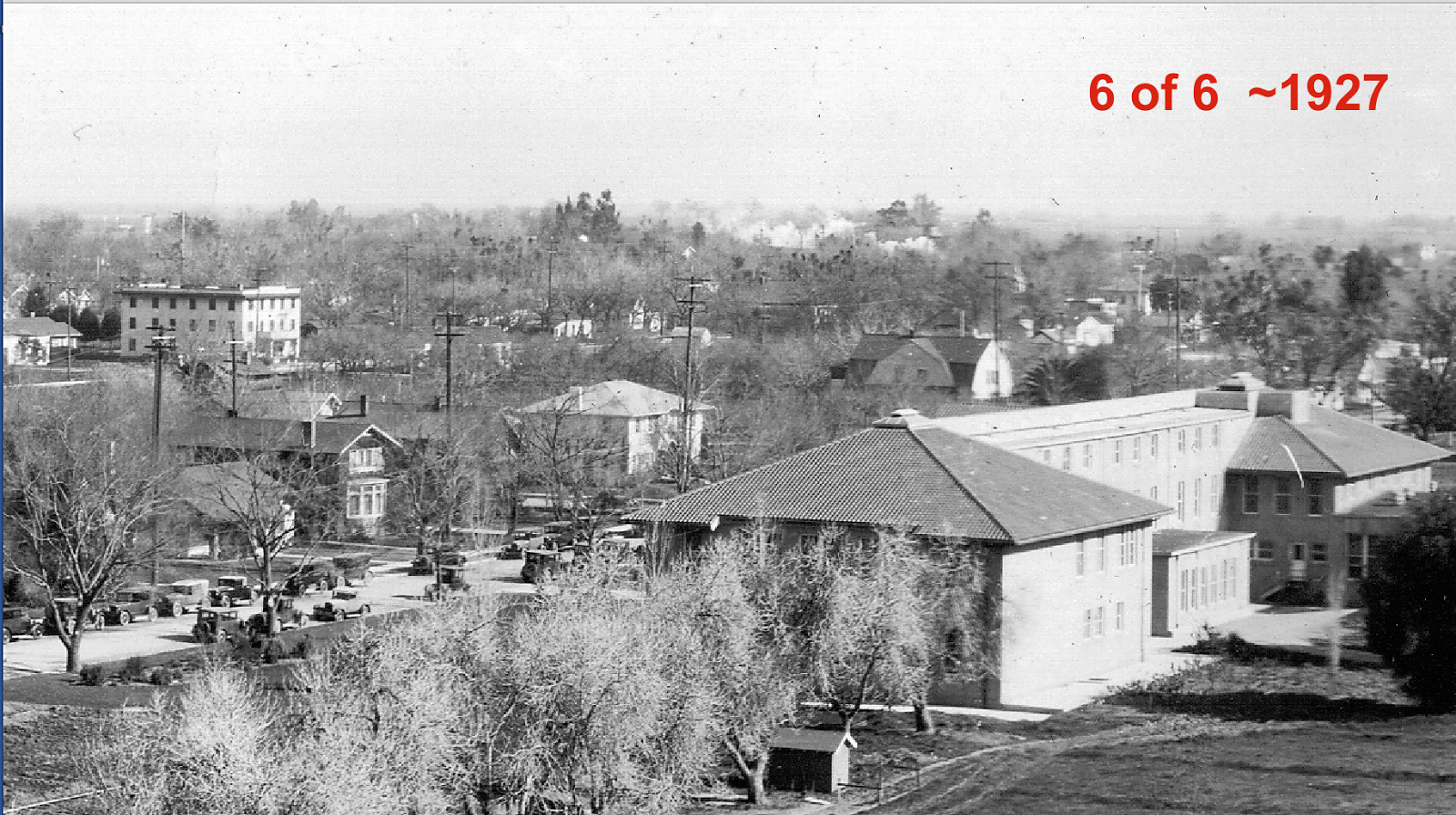 *          *          *
Looking at these views closely, I am struck by the number of what appear to be plumes of smoke rising from various points in the town. Because many of the trees have no leaves, we can infer the temperature was on the chilly side the day this photograph was made. It is therefore plausible to infer that we are observing the presence of a considerable amount of wood burning to provide home heating and cooking.