Twelve Color Snapshots
These image are in large part an assortment of well-known black and white scenes taken well before World War II.

But a small subset caught my attention. Deep in one of these files, there were twelve small color snapshots of Davis street scenes.

Laying them out on a Special Collectiions reading room table I could see that at least eight of the twelve were not random views of Davis streets.


Instead, it was immediately obvious that the eight taken on downtown streets formed pairs of views of four locations taken several years apart!

3. The third pair moves one block west and shows the northwestern corner of the Second Street 500s in 1966 and 1971 (information in the pictures provides this dating).

4. The fourth pair shows the northeast corner of the Third Street 600s block before the Union Bank of California building was constructed and afterwards.

I could not, initally, see how the last four formed pairs. But with enhancement and enlargement and viewing candidate scenes "on the ground," the two additional locations became evident--or I can at least make a plausible case for them.

5. The hardest to identify pair is taken looking east on Russell just west of its intersection with South Campus Way.

6. The last pair features the site of the soon-to-be built Russell Street Mall and the auto service station there after  the Mall’s construction.

Looking at the backs of the photos, Special Collections Department Collection Assistant Jenny Hodges pointed out that the Kodak company stamp on each contained a tiny printing date, which is April 1972. So, while the photos were taken years apart, the negatives were apparently assembled and printed as a set at the same time in 1972.

There is also a handwritten number on the back of each snapshot. The smallest number is 5 and the series proceeds unbroken up to 14, which encompasses five of the six pairs. The sixth pair is numbered 20 and 21. (The incomplete series and breaks suggest there may be other pairs “out there” that we have yet to discover.)

Most surprising, at least to me: the photos are numbered in the order I first laid them out in trying to make sense of them. That is, I only turned the snapshots over and saw the numbers after I had laid them out in an order that made sense to me in the logic of how I understood Davis to have developed.

Like one of those wonderful stage magic tricks, whoever made and numbered these photos used a logic that was identical to the one that came to mind when I looked at them more than 40 years after April, 1972.

Who Took These Snapshots and Why?
One obvious and more serious next question, to me, is: where did all those larger number of photos in the folders labeled “Yolo Co. (Photos)” come from--including these twelve in color?

I asked Special Collections what records on the photos it might have. There are none.

We are thus left with a mystery about which I can speculate.

My speculation is that all the photos, including the color ones, came from the illustrious and amiable John Weber Brinely.*

I guess Brinley based on what I learned from him directly in the late 1990s  (he died in 2002) and what I know from the public record.

Mr. Brinley was quite interested in Davis history, was a realtor, and was an amateur photographer.

The pictures express all three of these interests and involvements. Many of the twelve contain images of properties he owned or in which he had a financial interest.

When gathering photos for the Davis 1910s-40s book in the later 1990s, I learned from him that he had long taken Davis street-scene snapshots. (Five of them appear in that book--on pages 30, 41, 44, 58 and 127). He did not mention color photos from later periods, but then there was no reason for him to have done so because the Lofland & Haig book focused on earlier decades.

So What?: Documenting ‘50s-'70s Transforming Davis

So what’s the big deal about these perhaps pathetic twelve little color snapshots?
While this find is not a “big deal” it is of great interest to students of Davis history for several reasons.

The first reason is that these are color photographs, which, in cultural terms, is an obviously superior form of historical documentation. Up until now, we have had only black and white shots of the locations shown. As I will seek to show in the twelve posts that follow, we have increased our information. At least, my own sense of just how shabby Davis once was has increased.

Second, the locations themselves are among the small number of iconic areas of Davis. (As a life-long Davisite and grandson of one of the first residents of Davis, a realtor, and a history-minded person, John Weber Brinley knew what he was looking at.)

Third, the period in which they were taken--the ‘50s-70s--is among the most important in Davis history. In the three decades of the ‘50s, ‘60s and ‘70s the population of Davis increased ten-fold and its physical area increased seven-fold (as shown in the accompanying chart).

It was an astonishing ride and Brinely’s twelve snapshots capture important transformational moments in those three decades of massive change. 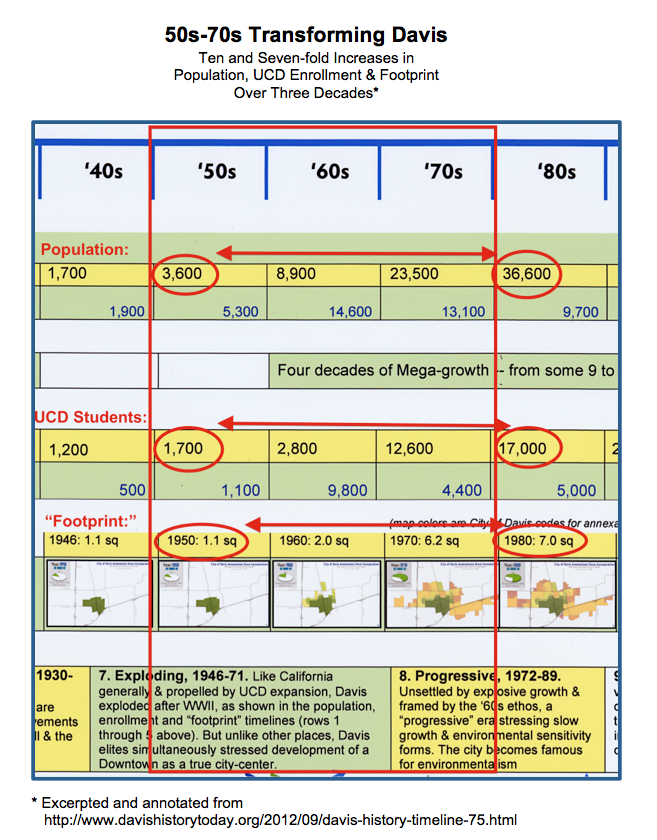 This Series
Over the next period, I will publish a post on each of the twelve snapshots and present them in this order.

* Profiles of the life of John Weber Brinley can be read here:
http://boards.ancestry.com/localities.northam.usa.states.california.counties.yolo/1971/mb.ashx
http://daviswiki.org/John_W._Brinley