REVIEW AND REVISION DRAFT. Please send suggestions to me, John Lofland, at jlofland@dcn.org 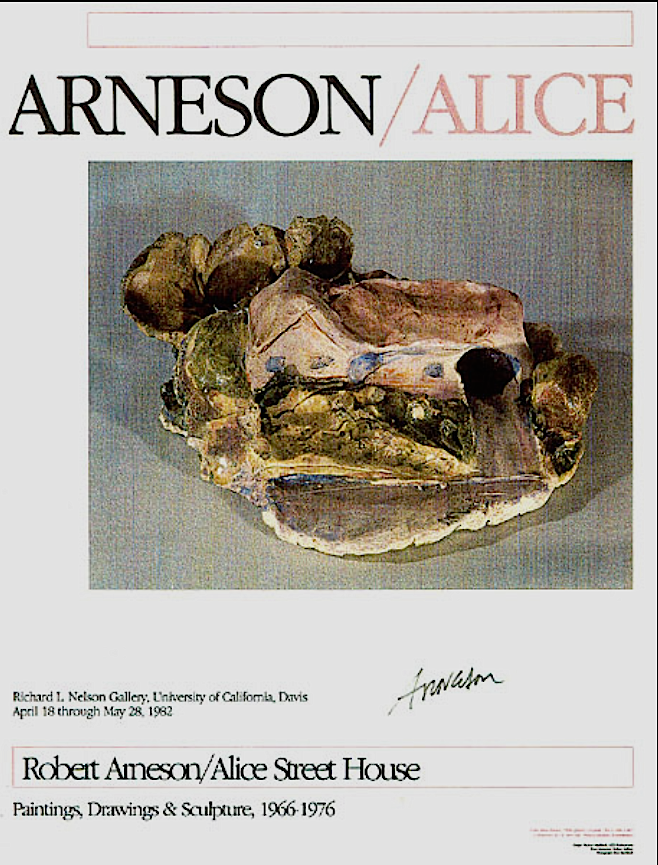 We come at last to why we care about Robert Arneson and his house in the first place: his art. And the reason we care about his art is to determine if his house should be a candidate for designation as an historical resource.

If historical resource designation required only that Arneson be a world-class artist, little would need to be said here. I would simply refer you to Jonathan Fineberg’s A Troublesome Subject and let it go at that.

But that act would be insufficient. It would leave out the most amazing aspect of this historical resource case. Arneson not merely lived there, he made 1303 Alice Street itself the subject of a large and striking body of art.

One might even make a case for the house being a historical resource based on the artwork about the house quite aside from whether Arneson ever lived there are not.

A first feature of this art work, sometimes called “The Alice Series,” is that at least since the 1980s it been recognized among art authorities as an important body of art per se. Already in 1982, only a few years after the last work in the series, the UCD Nelson Gallery presented an exhibit composed of selected works from it.* (A poster adverting that exhibit is reproduced above.) And “The Alice Series” has since become a standard item in diverse accounts of American art and items from it are featured in many museum collections.

A second feature is the sheer amount of it produced over the main four years of 1966-1970. I am not aware of a published serial-numbered list all the Alice works, which seems to mean the exact number of Alice works is not known. But my impression is that the corpus consists of many dozens of pieces, at least, and perhaps of even a few hundred items.

One of the problems in knowing how many works there are is that Arneson was casual and fluid about giving items away and selling them. Moreover, in a recent Nelson Gallery interview with Arneson’s four sons on the topic of growing up in the Alice Street house, one of them relates that their father stored many ceramic pieces outdoors in the house’s yard. Neglected in the wet and wind, a number of them fell over and sank into the soil and are underground there to this day.

In any event, it is useful to recall the term “obsessively” that Professor Fineberg used in describing Arneson’s devotion to the topic.

Third, one of the reasons there is so much Alice Art is that he did not confine himself to creating ceramic pieces, the medium for which he is best known and on which he built his reputation. He was also quite adept at and “at home” in pencil drawings on paper, watercolor, and oil on canvas--and combinations of these and other media. Ceramic items--even very small ones--are more complex and prolonged to produce relative to other media.

Ceramics has of course a preliminary stage of conceptualizing what a piece will be. This often involves a two-dimensional depiction on paper or such, which we see with some frequency in the Alice works.

It also happens that Arneson was doing his artwork in New York in 1967-1968, where he did not have access to a ceramic studio. It was in that period that he produced a very large number of Alice pieces in non-ceramic media.

Examples of various forms of these non-ceramic items are given in images 1 through 4. I regret that technical and other limitations allow only very limited representation.


Fourth, the largest number of ceramic items were what one would call “normal size,” meaning that one could pick up the piece with one hand or perhaps two and set it on a table (e. g. images 5 though 7).

However, in both ceramic and canvas form, he also “pushed at the envelope,” so to speak.

On the canvas side, in his New York loft he spent four months painting, with rollers on canvas, a sixty-five foot long life-size picture called The House at 1303 Alice Street. He offered it to the Whitney Museum, whose curator told him “this is not what is going on in painting today” (Fineberg, 75). He rolled it up, shipped it to Davis, and later destroyed it.

Rather less spectacular, the painting Alice House Billboard: Corner of L Street and Alice (image 8) rises to ten feet on the left edge, extends twenty feet horizontally, and the top edge declines to three feet on the right edge.

The ceramic Alice House Wall rises almost five feet from the floor and is some eight feet wide (image 9).

The signature Alice art piece is of course the three-dimensional “model” of the house and grounds titled The Palace at 9 a.m. (image 11). This is an especially interesting item because it is in one sense accidental. It was created in 1974, when Arneson had pretty much moved out of his “Alice period"--as one can see when comparing it to its predecessor (Image 10).

He created Palace because he did not have access to the original sculpture, which is titled Big Alice Street (image 10). It’s owner had loaned it for an Arneson retrospective in Chicago, but disliked how it was handled and refused to allow Arneson to keep it with the exhibition when it moved to San Francisco. So Arneson had a literal as well as a symbolic big hole in his retrospective. Simple solution: Make another one!

Both these are large pieces. Big Alice Street is some eight by eight feet and The Palace at 9 a. m. is almost six by ten feet pedestal mounted.

UC Davis officials are at this time constructing a world-class museum of art to the immediate southeast of the campus’ famed Mondavi Center. It is named the Shrem Museum of Art and is scheduled to open in 2016.

Recently, I asked an official of the new museum what has been selected for display there? For example, will Arneson art be on display?

I was told that there are as yet no decisions on what will be exhibited.

However, there have been decisions on two sculptures that will grace the Museum’s reception area. One of these is a horse sculpture by Deborah Butterfield.

The other will be The Palace at 9 a.m. (which is currently in boxed storage on the UCD campus).

Not long from now, thousands of people a year are going to look at that piece and read the Museum text telling them the actual house is at 1303 Alice Street.

Some portion of these viewers is likely to look at the real place.

In the context I have tried to develop in these three posts, I think it would be minimally appropriate for the City of Davis to recognize this Alice Street property as a landmark historical resource that is a vital element of our City’s cultural heritage.


http://www.verisimilitudo.com/arneson/alice/alice.htm
Posted by John Lofland at 8:10 AM