1303 Alice Street as a Candidate for City of Davis Historical Resource Designation: Post I of III, Introduction & Chronology (186)

REVIEW AND REVISION DRAFT. Please send suggestions to me, John Lofland, at jlofland@dcn.org 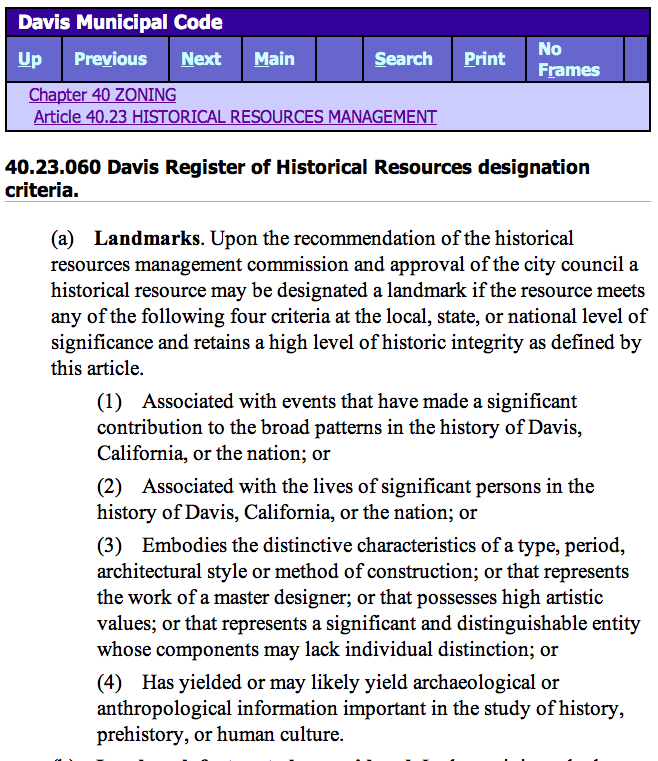 This is a three-post series on the question of whether the former Robert Arneson residence at 1303 Alice Street in Davis should be a candidate for City of Davis designation as a “historical resource.” In the first section of this post I explain what a “historical resource” is, how that status is determined, and why anyone should care.

In the second part of this post and in the next two posts I report three categories of facts about the “Alice house,” as some people call it, relevant to deciding if it should be a City of Davis historical resource or not.

The first of these categories, appearing below, is a chronology of what happened there in the relevant years of 1962-1976.  The second category and the subject of the second post is the psychology of artist Robert Aronson in the “Alice house” period and in larger context. The third category and post center on the art that Arneson created while he lived in the Alice house with major attention to his art featuring the Alice house itself.

The City of Davis is currently conducting a survey of structures and subdivisions built between 1946 and 1975 for the purpose of determining which of them might be considered “historical resources.”

Briefly and roughly, a “historical resource” is any structure in Davis “of . . . cultural . . . or historical value to citizens of the City of Davis and designated . . . by the city council . . . . These designated resources comprise the Davis Register of Historical Resources” (Davis Municipal Code 40.23).

A structure may have “value to citizens” for one or more of four reasons: it is associated with (1) key historical events or patterns or with (2) significant persons; (3) it exhibits distinctive architectural style or merit, or (4) it does or could yield important “archeological or anthropological information."

The City of Davis survey is being conducted by historical preservation consultant Kara Brunzell of Napa (email kbrunzell@yahoo.com) with the assistance of resident volunteers. I am one of the volunteers and one of my tasks is to research 1303 Alice Street.

Specifically, the question is the degree to which the house at the northeast corner of Alice and L streets might be an historical resource under criteria numbers (1) and (2)--associated with significant patterns and events and/or with a person significant in Davis history.

In overview, the significant pattern here is the rise of Davis (and UCD) in the later 20th century as an important center of a distinctively West Coast genre of high art partially captured by the term “funk.” Developed and centered on the UCD campus, this movement greatly influenced the development of the city’s artistic culture and institutions and continues to do so to this day in a wide variety of vibrant ways.

This significant pattern is associated with 1303 Alice Street because one of the giant figures (a significant person) in the rise of Davis as an art community lived there for fourteen years, from 1962 to 1976. This is of course Robert Arneson, who undisputedly ranks among the greatest American and perhaps world artists of the 20th century.

However, the mere fact that he lived at 1303 Alice for many years is not, to me, sufficient to recommend historic resource designation. This is because, as a university city, Davis has housed a great many world-class intellectuals, some equaling or exceeding Arneson in their significance. If designation depended on simply living someplace, we might be overrun with historic resource houses, thus cheapening the very concept.

In the spirit of more connection than simple residence, let me report a second key fact. Aronson not merely lived there; he made the place a major subject off his art for some eight years, from about 1966 to 1974. It might, therefore, be said to be an “art house” and not only an “artist’s house.”

With this as the framework, I shift from general declarations to the specifics of the matter. What precisely did Arneson do at and with 1303 Alice Street and why does it matter from a historical resources perspective?

We are exceedingly fortunate that prominent art historian and psychoanalyst Jonathan Fineberg researched Arneson’s art and life for many years and published an amazing description and analysis of both in his 2013 University of California Press book titled A Troublesome Subject: The Art of Robert Arneson. In 270-oversized double-column, small type pages one is transported into the complex worlds of “all things Arneson.”

Professor Fineberg is a very serious and accomplished scholar and I think I can do no better than to assemble facts relevant to historical resource designation from his account (while also drawing on other sources).

•  The 1303 Alice Street house was built at the open-field north edge of Davis in 1958 and the Arneson family moved there in 1962. At that time, he and his spouse, Jeanette, had three sons, aged 1, 3, and 6. A fourth son was born in 1964.  Age 32 when he arrived, Arneson was about to become a UCD tenure-track assistant professor. His last job before that was as a high school art teacher.

•  His art did not begin to feature the house until 1966. But once started, he produced a large number of many kinds of art objects in which it was the main subject.

•  While he was prolific, he was still a relatively unknown artist and did not yet have regular gallery outlets for his work. With art objects piling up around the house, he decided in April of 1966 to convert the Alice house living room into a one-day (Sunday) gallery of Alice art for sale and to distribute flyers to everyone he knew--friend, enemy, or whatnot.  (While several histories report this event, I have not read an account of how much art he sold.)

•  He had a year sabbatical leave in 1967-68 in which Jeanette and the sons lived in Doylestown, Pennsylvania for the purpose of accessing special medical treatment for one of the boys and he lived four days a week in New York. Not having access to a studio in which to produce ceramics, he turned out a great many Alice objects in several other media.

•  He was promoted to an associate professor with tenure in 1968. And, in October of that year, he met 21-year-old UCD undergraduate Sandra Shannonhouse, with whom he would begin a romantic relation.

•  This relation became known to Jeanette and there was a considerable period (years?) of break-ups and reconciliations with both women in which there was sometimes a kind of turn-taking between the women he was living with in the Alice house. In addition, for periods, he lived with one or the other of them in Benicia, Berkeley, Petaluma, and a 110 Russell Blvd apartment in Davis. (Or one of the women lived in one of these places alone.)

•  The fluidity of these residential pairings and changes was sometimes quite complicated. Professor Fineberg reports, for example, that in the:

. . . academic year of 1971-72 they [he and Sandra] had to relocate from . . . [the 110 Russell Street] apartment to Alice Street every weekend to look after the boys--that was Arneson’s arrangement with Jeanette. By June he and Shannonhouse were worn out from this arrangement and the stress split them up again. (Fineberg, 89)

•  During one period of attempted reconciliation with Jeanette in later 1969, he made a new-start gesture of beginning to create 1,500 Arneson-style floor tiles to be installed on the Alice house kitchen floor in time for a Christmas celebration. The project was stalled when, in using a gasoline powered fire device to remove the vinyl already on that floor, he ignited a large explosion that flattened him and extensively damaged the house, requiring major restoration (and providing for an additional bedroom). (The 1,500 tiles are apparently still there and one wonders if both they and the house were put up for sale which would fetch a higher price.)

•  The divorce action between Jeanette and Robert became final on November 10, 1972. He and Sandra Shannonhouse were married on May 19, 1973.

•  Arneson was diagnosed with bladder cancer and operated on in February of 1975. The couple decided to relocate to Benicia, partly because it was a return to the town in which he grew up and partly because it was closer to the Kaiser cancer treatment facility in Oakland. The process of extensively rehabilitating the property they purchased in Benicia postponed their leaving the Alice house until the summer of 1976.

These are the sparse chronological facts relating to 1303 Alice Street as regards designating it a City of Davis historical resource. In the next post, I will describe Aroneson’s perspective on these events and his art as reported by Professor Fineberg.

Let me close by calling attention to the portion of his entire career he spent living in this house. If you reckon that he began life as a truly professional artist when he moved into this house in 1962, when he died in 1992 he had been an artist for 30 years.

With periods away, the Alice house was his main residence for 14 years, 1962-1976. These 14 years form almost half of his entire career.

What is significant about this, to me, is that the main and most famous and important works of the fully-developing Arneson we think of today were done after he left Alice Street, I think art analysts would agree. That is, there are light-years of differences in intellectual insight and technical sophistication between his work before and after 1976.

I point this out not to belittle the significance of the Alice house period but to call attention to it as a fundamental fact that then leads to this point: His achievements in the Benicia period were built upon the person he became in the Alice period. The Benicia period would not have happened had there not been an Alice period in which Arneson re-fashioned himself into a person who was then a truly exceptional artist.

In the next post, I report Jonathon Fineberg’s analysis of how and why Arneson transformed himself. 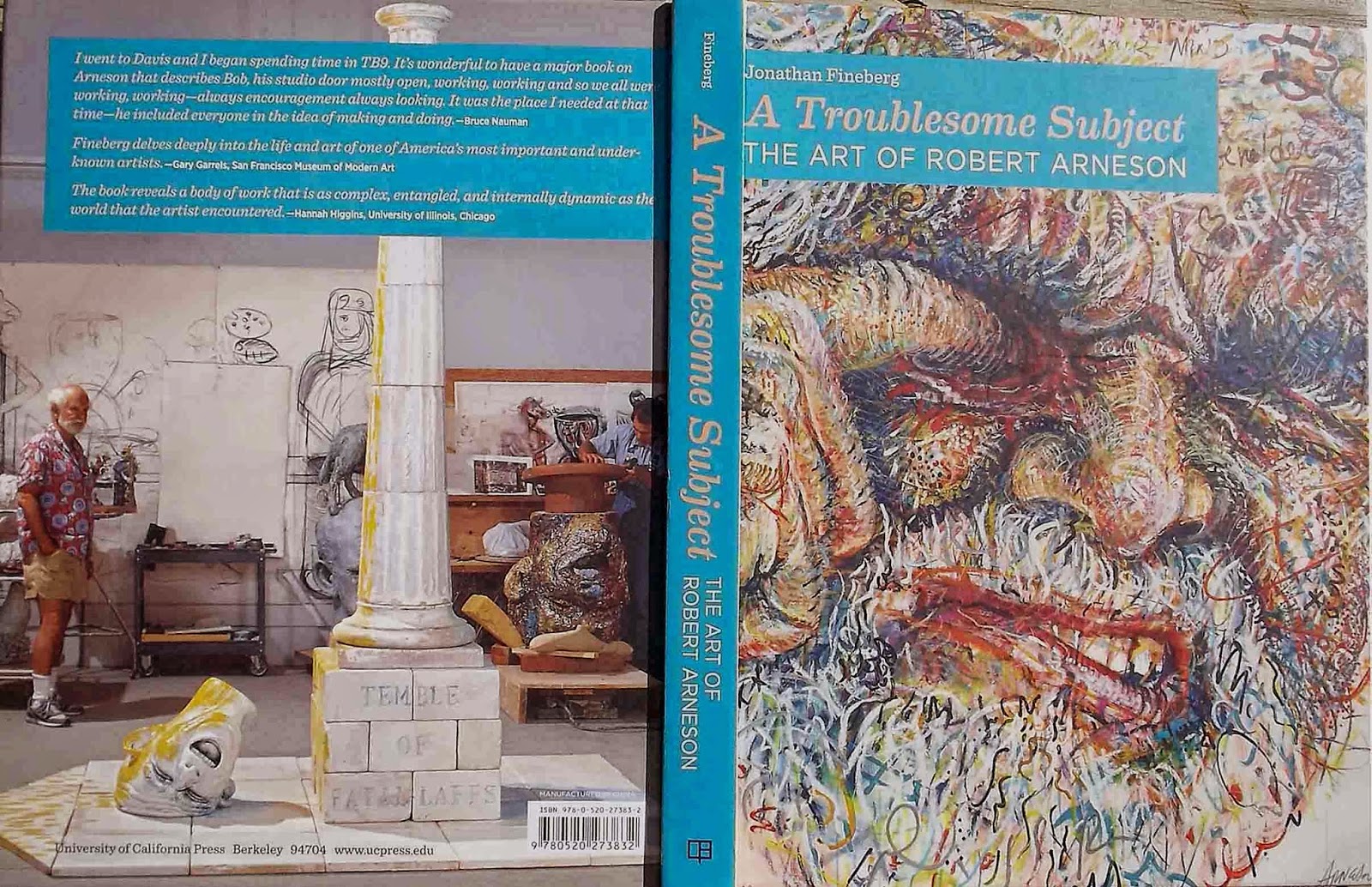