Exploding ‘40s through ‘70s Davis: About Two-Thirds of the Current Davis “Footprint” Was Created in Only One-Quarter of the City’s History (190)

one-sixteenth of its physical “footprint” would have been created in each decade.

But this did not happen. Instead, the greatest growth was concentrated in the four decades of the 1940s through the 1970s.

The blacked out areas on a recent City of Davis “Annexations By Decades Map”* (reproduced in this post after "the jump") show areas created before and after these four decades.


Together, these “pre” and “post” ‘40s-‘70s areas amount to about one-third of the total Davis footprint (by my "guesstimate" estimation).

Stated in the reverse, about two-thirds of the City’s footprint was created in some one-fourth of its history.

Among the major growth decades, the areas shown in light green display that the 1960s was the decade of greatest footprint growth. 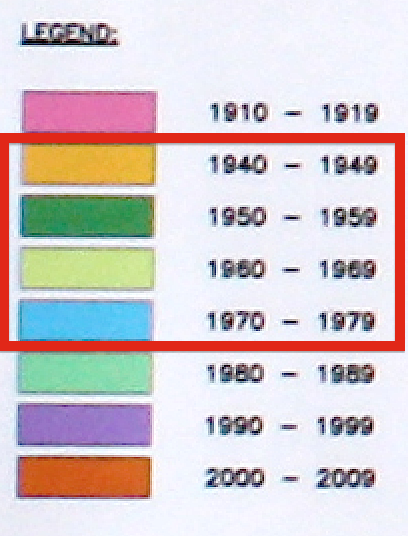 
* My thanks to Heidi Mikelic, City of Davis Department of Public Works, for drawing my attention to this new map.
Posted by John Lofland at 8:25 AM