The 1967 Davis Bike Lanes as a Designated Historical Resource (206)

As reported here and elsewhere, the City of Davis is currently in the fourth of a twelve- 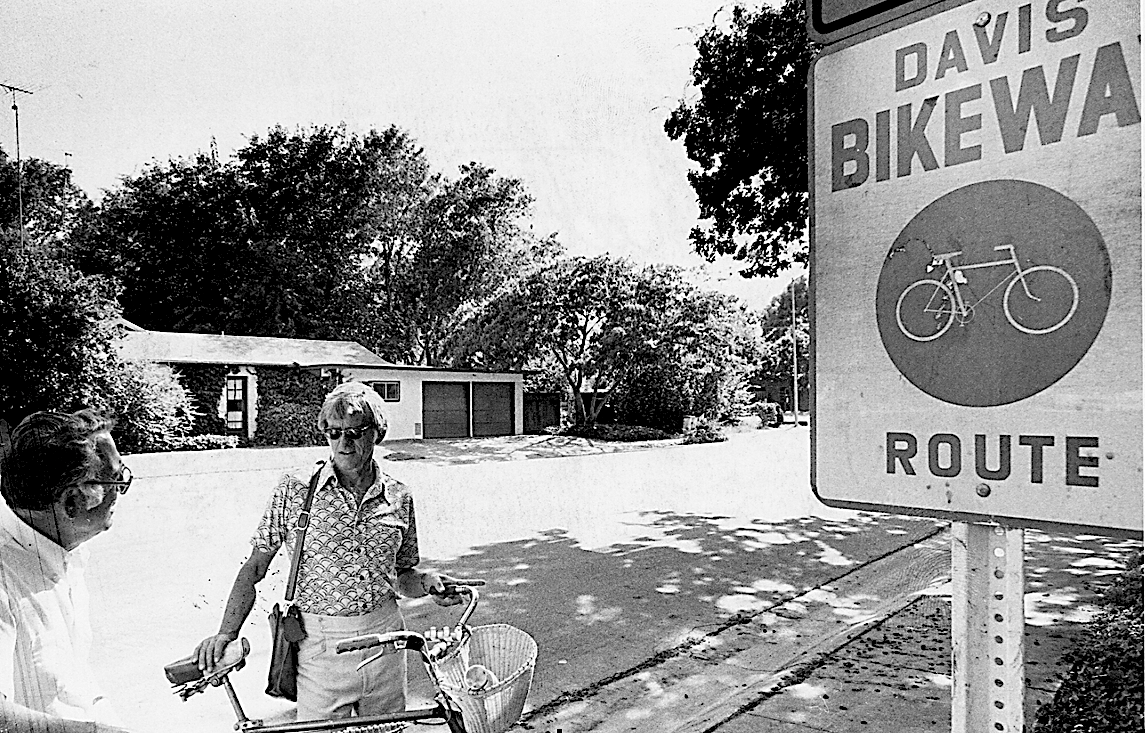 month project of updating its inventory of “historical resources.” The work focuses on the years 1946-1975. I am one of a number of volunteers working on that project and I seek to document a few of the small number of historical resources that might be be awarded the special status of “designated.”

A THIRD CANDIDATE DESIGNATED HISTORICAL RESOURCE. So far I have worked up some materials relevant to such designation decisions on 1303 Alice Street and on 340 F Street (the Wells Fargo Bank building) (DHT posts numbers 189, 186. 187, 188).

I now move to a third case, which is a resource of a different sort. Commonly, a historical resource is a building. But this kind of item does not exhaust that category.

Non-building structures and “landscapes” can also be designated. In Davis, we have already had three designations of this “non-building” sort. They are the Davis Subway (Richards Underpass), the Davis Cemetery (820 Pole Line Rd.), and the Avenue of the Trees (Russell Blvd., west of Arthur St.).

In this and subsequent posts I want to explore the possibility of designating a fourth such historical resource: The original, 1967 Davis Bike Lanes.

NARRATIVE OF 1967.  My exploration takes the form of a narrative of the year 1967 focusing on events pertinent to understanding these first bike lanes.

It is not often that a calendar year neatly provides the temporal framework for understanding a human endeavor. But, oddly enough, a calendar twelve-month frame seems to fit quite nicely. Or, at least, I happen to own an original copy of all the issues of the Davis Enterprise (DE) for 1967 and perhaps that convenience shapes my perception of the appropriate time frame.

My method has been to read that year’s DE’s and to photograph all stories relevant to bikes and bike lanes. (I also have a few issues of Davis’ second daily paper in that era, the Davis Edition of the Daily Democrat, which provides two additional stories.)

This process has resulted in 27 stories spread over 33 digital excerpts (because some stories ran on to a second page in an issue of the paper).

These 27 stories form a narrative that is vastly too complex and drawn-out to be dealt with in the technical confines of a single web post. So I have grouped the stories into more consumable units of substance that cover a month or so each.

The result is nine posts as follows.

These will be published over the coming days.

A PRIME OBJECTIVE: WHEN AND WHERE DID OFFICIAL DAVIS BIKE LANES BEGIN?  Designating something an historical resource implies that there is a specific place where it originated and that one can visit and view. That implication in turn implies that the thing one is viewing came into existence at some specific time.

There are, therefore, the questions of exactly when, officially, did Davis bike lanes as physical entities start and where on Davis streets was that beginning?

At this stage of inquiry, I must report the answer is certain only within a range of possibilities. As the posts that follow will report, we can narrow the “when” to sometime around July of 1967 and the “where” to--perhaps--someplace on 3rd Street or Sycamore. The records we have at this time are contradictory and no more exact that that.

We can say, though, that there does not seem to have been a “ribbon-cutting” type ceremony at which dignitaries assembled and hailed the dawn of a new bike era in Davis--or anything of that sort. Quite the contrary, there was a certain casualness and off-hand quality to the undertaking, in my view. Indeed, there was also more than a little publically expressed nervousness about the possible negative consequences of this new line of action.

THE LONGER TIMELINE AND THE WIDER CONTEXT. Lest there be misperception, let me say plainly that my focus here is much more narrow and specific than ordinary historical accounts of bikes in Davis. Those ordinary accounts feature several years in the early 1960s and even earlier and the energy of a number citizen activists, most especially Eve and Frank Child, and an initially recalcitrant Davis City Council that later “saw the light” on the wisdom of bike lanes. This is definitely not the story of interest here.

The most comprehensive account of this wider story, which is not online,* is, I think: