A Glimpse of Davis Politics in 1964: A Banker Pledges to Manage Explosive Davis Growth and is Elected to Council (232)

Current and recent Davis City Council members might eat their hearts out about Davis politics in 1964.

In that year, Davis was a town of public abundance and explosive growth in which--gasp!--a banker was elected to the Council, running second in a field of six with 55% voting for him.

Equally as odd in current perspective, a Davis junior high school teacher finished first with 61% (and served as Mayor) and a pharmacy owner was elected in third place with 52%.

A little of the tenor of that time is conveyed by a campaign letter and platform card published by the banker, one Robert M. McChesney, that I reproduce here.

I came onto these two items accidentally. They are so startling to me that I can not resist sharing them on this blog.

Not least among the many notable aspects of Mr. McChesney’s platform is the mater-of-fact obsevation that “Davis will triple in size by 1970.” Today such an assertion would snap heads around, but then, apparently, it was a mundane truth. 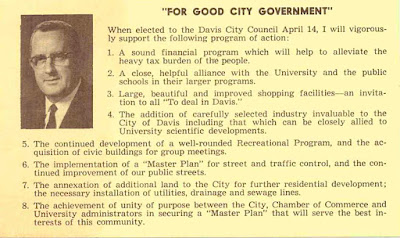 In the course of looking for something else, I came onto a December, 2003 Sacramento Bee report on Davis civic leaders meeting to discuss public policy actions needed in Davis at that time. These included creating “space for labs and a business or research park.”

The ensemble of these proposals was so similar to what one can read in current such accounts that I wondered, for just a moment, if I had stumbled into a Groundhog Day time warp.

Here is the report. (The red markings are notes to myself made a decade ago.)