Historical Resource Designation Disputes and You (239) 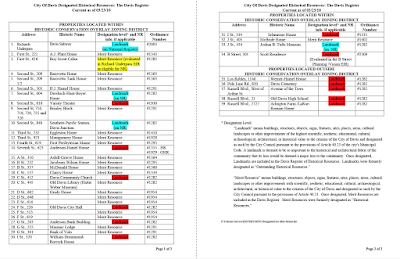 The Historical Resources Management Commission (HRMC) is nearing completion of a 2015 “update” of an inventory of “historical resources” in Davis.

Their completions have sometimes occasioned a flurry of “designations” of new historical resources in the form of “listing” particular buildings as “merit” or “landmark” resources or entire areas as “conservation” or “historic” districts (described in reference # 2).

I think there is a tendency to assume this surveying/designating is “natural” or “inevitable." It is an immutable aspect of the natural order of social things in Davis.

But it is, in my view, neither natural nor inevitable. Instead, “historical resources” and “preservation” are central advocacy ideas in a particular political point of view regarding the human built environment and its management.

And in being the fallible creatures we are, what these ideas “actually” mean and how they are to be implemented are disputed in many ways. Even the best-trained experts on these topics feud among themselves on what actions are appropriate in basic situations. (See, for example, the work reviewed in reference # 4.)

FOUR-CASE QUICK-COURSE IN DESIGNATION-GRITTY
The special junction we are now at with the impending completion of this fourth survey prompts me to offer to interested residents a “quick-course” in making concrete and vivid my so-far merely abstract claims about the frail human and fractious political nature of the historical resource enterprise.

This “quick-course” consists of descriptions of four instances where designation was proposed by Davis historic preservation professionals and supporters but was successfully resisted by ordinary citizens. 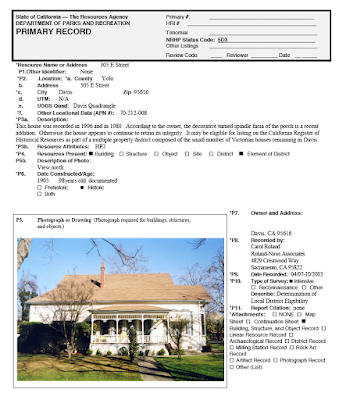 The critical thing to understand about each of these cases is that the historical facts very clearly and without equivocation supported official designation. But, designation did not happen because the owners and others did not want it (for somewhat different reasons from case to case). Officials involved honored (caved in to?) those preferences.

1. 305 E Street.  Designations were afoot even before the first official City survey of historical resources and the house at 305 E came under designation scrutiny in 1973. But the owner, Mrs. Iva M. Bruhn, spoke against it and even retained an attorney who wrote strong letters to the City representing her views (described in # 1, below). It has never been designated.

2. 238 G Street. In 1936, a beautiful moderne style building was erected at the southeast corner of 3rd and G. It became a candidate for designation in the wake of the 1996 survey, but, according to reliable reports, owner opposition meant the idea never even got to the level of formal consideration by the HRMC, much less to the City Council.

3. 514 C Street.  Also at the time of the 1996 survey, the church at the northeast corner of 5th and C was felt by many to be a natural and obvious candidate for designation. At an HRMC meeting I attended where the matter was taken up, the religious functionary in direct charge of that church spoke against designation. There was other opposition as well and the HRMC dropped the matter. 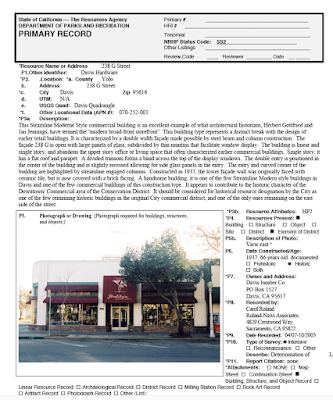 4. 200 G Street.  At the time the owners of the Terminal Hotel Building at the northeast corner of 2nd and G announced plans to demolish it, the HRMC voted unanimously (7-0) to designate it as a "merit" level historical resource. As is part of the process, that recommendation was presented to the City Council for final approval. It was rejected in a 4-1 vote.

I think these four cases support the generalization that there is nothing automatic or inevitable about designation of historical resources. Indeed, one might even say that historical preservation is a volunteer program if one choses to regard it as such.

CONTRIBUTORS
There is another aspect of all this that merits serious even if secondary mention. In areas considered candidates for “district” designation, the historical resource surveyor evaluates each structure as being or not being a “contributor” to a historical district should the process of forming such a district be started.

But, even if no district designation process is ever started, the survey has still labeled some homes as “contributors” and others as not. 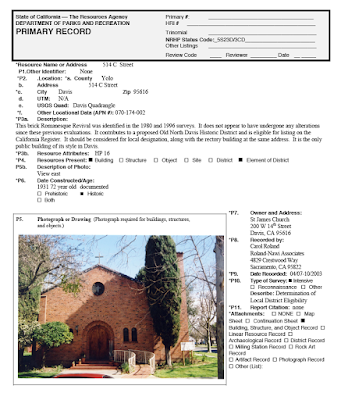 It turns out that this seemingly minor and inconsequential bureaucratic act can have considerable consequence. It spells the difference between being able to remodel or otherwise change one’s house through ordinary planning department procedures versus being caught up in the constraints of being treated by planning officials as an historical property. If planning officials choose to take the “contributor” label seriously, new levels of research and review not required of non-contributors are activated.

At the very least, anyone who lives in a home labeled a contributor has to be concerned with how seriously planning officials, realtors, and prospective buyers are going to take that label and the possible activation of a vexing web of impediments and costs.

Of particular concern regarding this process of classifying houses, unlike designating historical resources, there is no public hearing or review of this classification action.

An unsupervised surveyor commonly does it alone and there is no systematic oversight, checking, or independent review. This structure creates the easy possibility of careless error and arbitrary action lacking control.  (I am personally acquainted with what I think are at last four instances of this kind of unchecked error in the 2003 survey.)

CONCLUSION
One main “take away” from this post is the bland and even platitudinous declaration that people should pay a reasonable amount of attention to what the historical resource and preservation folks in Davis have done and are doing as regards your home.

In particular, if your house was built between 1945 and 1975, it has likely been surveyed recently and scrutinized for fitting into (or not fitting into) the classifications I have described above. It is in your interest to find out how your house has been classified and to speak up if the action the HRMC is about to take is of concern to you.

4. Review of Recent Book on the Politics and Decline of Historic Preservation in America:
http://www.davishistorytoday.org/2012/12/review-of-preservation-politics-by-bill.html