The recently conducted “update” of the survey of historical resources in Davis classifies hundreds if not thousands of Davis buildings on the degree to which they are “historic.” The two prime categories of these classifications are “designated historical resource” (or not) or “contributor” to a possible historic area (or not).

If your house is coded an instance of either of these categories, you are likely subject to restrictions or limitations when you want to sell your home or to change its appearance.

Such restrictions and limits have long been recognized with regard to the category of Designated Historical Resource, of which Davis has 39 at this time (Davis History Today, post 229, September 28).

What is now more fully coming to light is that the previously unnoticed category of “contributor’ can engender similar restrictions.


The two are different, though. A special work-up, a public hearing before the HRMC, and Council approval are required to create a Designated Historical Resource.

But no such procedures are needed for a surveyor to, in an instant, create a “contributor” by making a seemingly innocuous entry such as “3D/3CD” or “5D3” on a survey form. Only a few highly subjective declarative sentences are then needed and concluded with a version of a sentence containing a form of the verb “contribute” (e. g. “. . . contributes to a district eligible . . . ”).

Over the past several months, a half a dozen or so people have been reviewing Davis homes built before 1976 and classifying them as contributors or not.

LACK OF REVIEW.
Several instances of what I think are misclassifications have come to my attention. So I looked into how one might get these “codings” reconsidered and changed.

The Davis City staff person charged with preservation matters reported to me there is no provision for neutral, third party review at the City level.

Further, I have learned that this topic is not merely theoretical.  Last July, a home owner applied to the Historical Resources Management Commission for a reclassification from a contributor to a non-contributor.

But, the commission declined to act and the applicant was told only that a surveyor would think about it. As of this publication, the applicant has never been told the fate of that appeal. (I provide details on this case in the next Davis History Today post.)

THE CA OFFICE OF HISTORIC PRESERVATION.
These surveys are creatures of the State of California Office of Historic Preservation (OHP). The survey forms are supervised by them and sent to them. Indeed, that office is even an important source of financing for the surveys themselves. (In the current instance, half of the 40 thousand dollar cost comes from the OHP.)

In view of the fact that City review and reevaluation seems a dead end, I asked the OPH to tell me about their procedures for third party, neutral reevaluations.


A copy of the email I addressed Lucinda Woodward, the OHP official in charge of surveys, asking this question appears as Image 1.

I got no response from Ms., Woodward, although I am told by a City staff member that on the same day I sent her my email she was in touch with City of Davis preservation staff asking them for a report on my request.

Getting no response in a week, I sent her a second email request and received an answer from Amanda Blosser, who describes herself as “delegated to respond.” As seen in Image 2, Ms. Blosser seems to say that they have no procedure for review of how properties are classified as historic or not.

Indeed, notice that she switches the topic from reviews and reevaluations to “update” and adding “information to a record.”  Reevaluation of a classification decision and adding information are of course entirely different intellectual operations.

I fear I must say that Ms. Blosser either does not understand the question or is trying not to deal with it by changing the subject. (In preservation thinking more generally, there are apparently never errors or mistakes, only new information.)

IMPLICATIONS.
These acts of classifying houses are government decisions because government can enforce them through what planning staff will or will not approve.

One of the fundamental principles of legitimate government is that all decisions are reviewable and reversible based on measured review and inquiry by neutral third parties.

As far as I have been able to determine, none of these procedures exist as regards the surveys of historical preservation done in Davis.

If the City of Davis desires to be a legitimate government, it should either provide for neutral third party review of these survey decisions about what is or is not an historical resource or it should not be engaged in these surveys.

Historic preservation programs operated by the state are voluntary for local governments.  Davis could withdraw from the state program and operate its own program -- or have no program. Because of historical preservation’s murkiness, subjectivity, and lack of intellectual rigor as a body of thought, I think that having no program is an alternative we ought to consider. 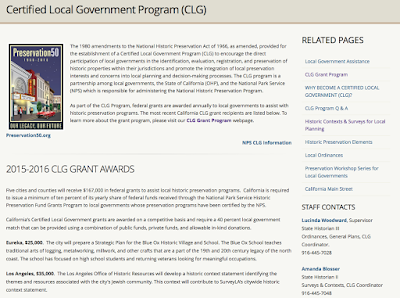