Researching a Davis history topic, I wondered if the UCD Partansky Papers collection might

contain information on it. So, I looked at the list of the collection’s contents, which is in 23 boxes, and requested a half dozen of them for inspection in the Special Collections reading room.

But, while looking for information on my topic, I got interested in the collection per se.

I was so struck by it--or at least by the six boxes I examined--that I decided to share what caught my attention with readers of this blog.

One, she was something of a packrat regarding her political activities. I cannot say she saved every note or card or letter any political figure sent her, but she certainly saved a great many of them. So, still living and active political folks who ever sent her anything written might be interested to learn that their missive or missives are likely in this collection.

Two, she kept detailed hand written notes on City Council and other meetings. These often contain her frank and sometimes-unflattering personal observations on participants in those meetings. Her blunt views of many other people are also expressed in other kinds of documents. 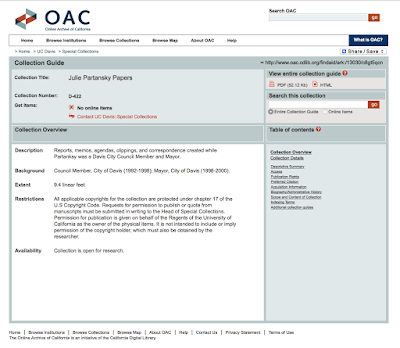 These writings are rather near in time and quite a few of the people they are about are still active. Her observations are candid to a degree that I have wondered if it might be too soon for this collection to be public. I personally find the material too forthright to report on in any detail.

She died quite young as these things are reckoned in our era--at age 60, in 2009. So, her papers could become available rather sooner than might otherwise happen. Collections can be “closed” to the public for initial periods of years and that might be considered here (although I do not know who has the authority to do this).

Three, there are 76 videocassettes of Council meetings and a variety of other Davis political events and reports. Who would have thought that this stereotypically lo-tech person was a VHS videocassette archiver of political doings?

Four, the great bulk of the materials are council packet items and reports of many sorts. These might seem a waste, but many of these documents are now hard to find. Having them here concentrated in the 1992-2000 period is of great value, in my view.

Five, the nuts-and-bolts items on her two campaigns are included, even down to real campaign buttons and donor and lawn sign name cards. 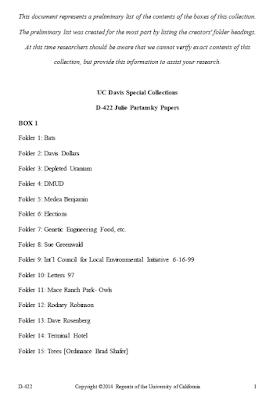 There are many other categories of items, but I will stop here. The entire list of boxes with contents is referenced below.

Among the several ways in which Davis is odd is the fact that it has a professional archive organization in which at least a few Davis residents can install their documents. I recently described the collection on Stonegate developer Alfred F. Smith (post 234, August 27, 2015). Now we have Julie Partansky. Although it is not widely known or appreciated, there are, in fact, a fair number of other such caches of potentially sensitive collections in UCD Special Collections.

What difference, if any, does the availability of such bodies of material make? Should we care that sometimes still sensitive social and political documents and claims are “out there” avaiable to anyone who cares to go and look at them? Alternatively, should we celebrate the availability of this material and encourage its dissemination?