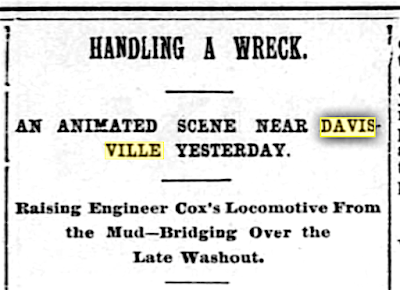 In reading Davis history, I have occasionally noticed claims that the rail track built from Vallejo to Sacramento in 1868 was a fragile and even jerry-rigged contraption that frequently failed and required near-constant emergency repair.

In addition to that possibility, because rail track technology was new and the land unexplored, it was impossible to know with any precision how strong to build tracks to withstand what kinds of troubles. So, one guessed at what was needed and dealt with track failures when they happened.

The Monday, January 27, 1890 issue of the Sacramento Daily Record-Union prints a report of two track failures near (then) Davisville that I think tell us quite a lot about that track’s strengths and weaknesses almost a quarter of a century after it was built.


A first and mundane observation on these failures is that the rail track still seemed quite vulnerable to flooding even after more than two decades of repair and (perhaps) improvement.

A second (but to me much more interesting) observation is that railroad officials had developed a quite remarkable system for dealing with track failure. That “remarkable system” is what the reporter describes in the story I reproduce here.

(The description makes clear that the people enacting this “remarkable system” had an enormous amount of practice!)